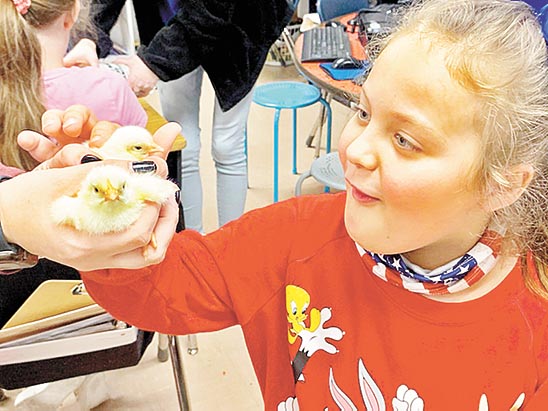 WEAKLEY COUNTY (March 22) – When Terri Brundige and other farmers from throughout the county delivered a dozen fertile eggs to each school’s second-grade classrooms three weeks ago, she was noticeably nervous.

“I just hope they hatch,” she confessed of the project that included incubators, candling tools for observing growth, brood boxes and lights, waterers and feeders, journals and study materials. “I don’t want to disappoint the children,” Brundige said.

“This whole process is so children can understand compare and contrast, life cycles, add vocabulary and math skills,” she added. “The incubators are on Celsius so we have a science lesson there, too.”

To ensure that the project was an aid in the classroom, Brundige consulted with Terri Stephenson, supervisor of Elementary Instruction, to identify the standards the experiential learning would touch on.

“They will learn so many things that they probably do not know, that even I may not know from having it in their classroom and getting to experience watching these hopefully turn into chicks,” Mary Margaret Chester, member of Farm Bureau Women and one of the deliverers of the eggs three weeks ago, along with husband John.

“One of the purposes of the Farm Bureau is to promote agriculture, and we feel like, as farm families become more removed from the farm, it’s an opportunity for us to get in the classroom and teach children who will also teach their parents about the lessons they learn and give them opportunities to explore agriculture even though their grandparents may not have a farm anymore,” underscored John Chester, president of Weakley County Farm Bureau.

Twenty-one days later, the students’ excitement could not be contained as most classes have seen 3, 4 and as many as 8 chicks, make their way to freedom outside the shell.

“I’m beyond thrilled,” she shared as she checked in on the second grade teachers and learned of the progress.

On the day when most of the chicks hatched, their chirping could sometimes be heard over the students’ exclamations, but only if the equally excited teachers called for attention. When asked, one young boy said of the births, “My mind was blown.” Students enthusiastically shared about the candling process that allowed them to detect viable embryos and chronicle the growth. One or two were amazed to see that blood was involved in the birth process.

A grant from the Tennessee Foundation for Agriculture in the Classroom afforded Brundige and the Weakley County Farm Bureau Women’s Committee with president Linda Fowler, the chance to organize the project. The experience has been deemed a success by teachers.

“This has been the highlight of Spring 2021!” exclaimed Sherry Hatchel from Dresden Elementary. “It was such a miracle to watch the little chicks hatch!  Each child learned about the life-cycle and care and feeding of chicks. They were nice additions to our class!”

Greenfield’s Beth Ann Sawyers offered regular updates on her Facebook page including the initial “birth announcement” reporting that after a day of watching and waiting, chick “Alivia made her arrival at 2:47 p.m. right before dismissal.”

Alison Whaley Crotts from Martin Primary describes some of the learning that has been possible. “We had a math lesson based on the brooding box. We measured its dimensions, defined the three dimensional shapes (box is a cube, the light is half of a sphere, the feeder is a cylinder), and solved elapsed time problems using our chick’s hatch times!” she explained.

Using the gifted journals for narrative writing, increasing vocabulary words and recording observations are also among the learning that has transpired. “This has been such a great experience and I’m finding tons of ways to incorporate the project into our standards,” she reported.

Kim Castleman at Martin Primary acknowledged that she initially did not embrace the project but is now a convert hoping for a repeat next year. She points to how much the children learned from the hands-on experience and that they were then eager to write what they were seeing. She even was able to teach some life lessons.

“Sadly, one did not make it completely out of his shell and died. The kids know this is the ‘circle of life’ and were sad, but ok with it,” she said of the chick the students had named Woody when they initially labeled each egg. “We held Woody a memorial service and buried him by our classroom door. When I asked if we should sing a song, they chose the Star Spangled Banner.  Some even saluted as I buried him.  It was precious and, oddly, one of the most precious moments of the year.”

Nicki Moore, also at Martin Primary, underscores the empathy she’s seen as well, “This experience has been incredibly exciting and the children are filled with wonder. The nurturing nature of my students has been evident throughout this past week as the chicks hatched.”

Kimberly Laws at Greenfield said in an interview on the day chicks were hatching that as a transplant to the South she had never as a child considered where the milk, eggs and cheese from the store had originated. She is among the teachers who are hoping for another turn in 2022 at helping students consider where their food comes from.

“Most of the kids have never seen anything like this before,” she acknowledged. “They have shared it with their parents, with other students, with the teachers. Other teachers are coming to observe and see what’s happening. I hope the project continues each year.”

Brittany Morton at Gleason agrees. “I was one who was reluctant to take on the project in the beginning,” she said. “Now I’m ready to do it again!”

According to Linda Fowler, who is both the Weakley County Farm Bureau Women’s Chair and an educational assistant at Martin Primary where she has witnessed the group’s investment unfold, that could be a possibility.

“It has been a fun week and I have enjoyed watching the excitement in our teachers and students. The teachers have really embraced the project and have even been coming back at night to check on their baby chick’s progress,” she observed of the countdown to hatch day. “I would love for our Weakley County Farm Bureau Women’s group to make Chick Hatching a tradition and offer this opportunity again next spring.”

Brundige praises the administrators, librarians, teachers, and students who have embraced the project.

“We are fortunate to have great community support that enables the Farm Bureau to provide this type of experiential learning to our county students. While this was primarily a second-grade project, many other associated adults and students have enjoyed the anticipation and shared the excitement of hearing and seeing the chicks during and after hatching. Learning is a lifelong process and our hope is that this project has provided a learning experience for everyone involved,” Brundige concluded.

Roxana Smyth of Close to My Heart Scrapbooking added decoration to all the students journals. Weakley Co 4-H will supply some additional materials for each student.

Delivery of the eggs involved farmers from each of the areas surrounding the schools. John and Mary Margaret Chester, Martin; Kenneth and Janice Moore, Dresden; Doug Rook, Palmersville, and Spencer Stewart, Gleason; Janie and Alice Ann Yeargin, and Ben Garner, Greenfield all took part in egg presentations to the classrooms.

VanCleave, the second grade teacher at Sharon School, piloted the project last fall when Lindsey Parham, local chicken grower and a member of the Weakley County Schools staff, gifted her classroom with an incubator and guinea eggs.

“We set aside each Thursday to view our eggs by candling them. This interesting project also drew attention from the Central Office and the community. Everyone was amazed to see how these little eggs created such an environment of excitement and anticipation that led up to the day when we came into our classroom with three little wet keets (baby guineas) were moving around in their incubator,” VanCleave said.