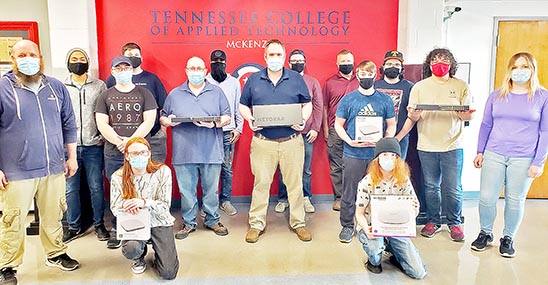 Belew connected TCAT McKenzie ITSM Instructor, Jon McKinney, with his sales rep at Netgear, Rose Bell. After talking with Bell and one of Netgear Inc. network engineers, Keith Nielsen, the company gifted the program with new hardware to work with.

ITSM Instructor, Jon McKinney, stated when asked about the type of class and what was taught, “The ITSM class at TCAT McKenzie is setup to train adult students in the field of Information Technology. We start off with the very basics of computer repair, move into networking, copper and fiber optic cabling, VoIP phones/telephony, information security, and finally end with server maintenance. We have over one hundred hands on skills tests that teach the students using real world hardware in real world scenarios. We believe that having the theoretical knowledge is only part of the equation, the practical application of that knowledge is paramount in being a valuable technician in the information technology field.”

Once Instructor McKinney explained what is taught in the ITSM class and that local students are put to work in the IT field in the surrounding area, Netgear Inc. representatives were interested in being a part of the training program and offered a generous donation of training equipment.

“Our students are extremely excited to have more enterprise equipment to train with,” a press release noted.

Areawide Communications in Medina, donated several VoIP phones as well. Owner Belew made the generous donation to the class after learning the VoIP/Telephony training equipment the program uses is set up for Avaya phones only. Areawide has hired several of the ITSM graduates over the years. Belew said he felt that it would be a win-win situation being Area Wide Communications plans to hire more TCAT McKenzie graduates in the future and they would have experience with the hardware their company uses and supports.

“We would like to show our appreciation to Mr. Sherrill Belew, the entire crew at Area Wide Communications, along with Rose Bell and Keith Nielsen from Netgear for the very generous donations,” TCAT representatives noted in the release.

For more information about the programs offered at TCAT McKenzie, call 731-352-5364. New classes begin May 3.