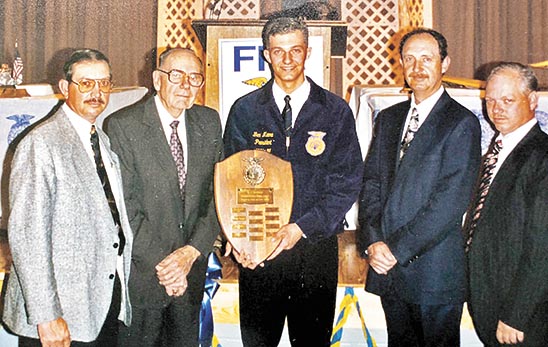 Ben Moore, who was FFA President at Dresden High School, shown with plaque in recognition of his many accomplishments. Those present were (left to right): Kenneth Moore, V.J. Shanklin, Ben, Larry Houston and Ray Griffith. V.J. was Kenneth’s FFA Advisor and Larry and Ray were Ben’s Advisors.

DRESDEN (March 123) — This year’s farming section in the Dresden Enterprise focuses on a local farming family and how agriculture has evolved over the past several decades. One such family farm is operated is by Kenneth and Janice Moore of Dresden.

Kenneth comes from a long line of farmers. His parents and grandparents were both heavily involved in agriculture.

Kenneth and his older brother, James Odell Moore, grew up on an 80-acre farm located five miles east of Dresden on Highway 54, between what is known as the West Union Community and Ore Springs. His brother, James, currently resides in Martin.

The size of his family farm was typical of that day and time. His parents had a few cows and hogs to supply meat for food, and they always planted a large garden, which supplied them with vegetables to preserve for the winter. Kenneth’s dad had a few acres of corn and hay to feed the animals and a few acres of cotton as a cash crop.

“Farming has never been easy, but back in those days, it was especially hard, because much of the work was done by hand,” Kenneth said. “I have heard my brother, James Odell, laugh and tell about how he and some of his buddies joined the Navy as soon as they were old enough to get away from the farm so they could see the world.”

After James’ tour of duty in the Navy and getting established in business, he purchased several acres of farm and pastureland. He was actively involved in a cattle operation with Kenneth for many years. James sold his interest in the cows to his nephew, Ben Moore, and now rents pastureland to Moore Cattle Farm.

In order to supplement the family’s income, during the summer of 1954, Kenneth’s father, James, decided to take a job off the farm working in a factory in Union City building car seats for automobiles. He worked the night shift and farmed during the daytime. He continued this way of life until his untimely death in 1971.

“I can remember riding with my dad, as a small child, on a ‘Black Hawk’ two-row planter, drawn by a team of mules, as we planted corn,” Kenneth said. “We had a small Ford Ferguson and that was about all we used in those early days.

“Agriculture and farming in general have gone through many changes during my lifetime. Back in the 40s and 50s, probably 80 percent of the American population lived and worked on a farm. Today, I’d say less than 2 percent are involved directly in the production of food and fiber. Starting in the mid 60s and continuing through today, agriculture has become more mechanized and farm size has increased.

“On December 19, 1969, I married the love of my life, Janice Houston,” Kenneth said. “We have been married for 51 years and have three wonderful children.

“In 1974, I bought my first farm from Janice’s grandfather, Loner Wright. He owned a 75-acre farm, and he said he’d be willing to sell it to me and finance it if I was interested. I took him up on it and vowed to repay him for his confidence he had placed in me. Over the years, I have been able to buy other farmland.

“Our farming operation has grown from about 250 acres of row crops in the early 70s to about 3,500 acres today, which is a combination of owned and rented land,” Kenneth said. “We are fortunate to be able to have a mix of rented land as well as purchased land in Weakley and Henry counties. Our land is in about a 20-mile range from one end to the other from our home base where we have a grain system on the farm.

“We double-crop soybeans with wheat and rent 200 acres of pastureland from family and others for our 80 cow/calf operation.

“Our equipment fleet is made up primarily of late-model, well-maintained, John Deere equipment. We use variable rate seeding, fertilizer, and lime prescriptions on all applicable acres,” Kenneth said. “We hire two-and-a-half full-time workers and hope to take advantage of available family labor with the grandsons.”

Members of the Moore family all have college degrees. Due to the complexity of farming operations these days, it is important to be informed concerning current agricultural methodology and practices.

“While some students loved sports, I loved agriculture and FFA, mainly because of my advisor and favorite teacher, Mr. V. J. Shanklin,” Kenneth said. “He was very instrumental in my development as a public speaker and parliamentarian, and we entered many local contests. I held various officer positions during my four years in FFA and was President of my local chapter my senior year.”

After graduating from high school in 1966, Kenneth enrolled in college that fall at the University of Tennessee at Martin, where he received a degree in Agriculture Education in 1970. “This qualified me to teach Vocational Agriculture, but in the back of my mind, I really wanted to be a farmer,” Kenneth said.

In February of 1970, Kenneth joined the Tennessee National Guard and went to Basic Training and Advanced Individual Training for four-and-a-half months at Fort Leonard Wood, Missouri. Upon returning, he finished college in the fall of 1970. It was about this time that a big transformation was taking place in agriculture. For a short time after college, he sold insurance and farmed. The opportunity to rent more land arose, and he decided to become involved in farming full-time.

Janice finished her degree in Business Education and Elementary Education and took a job teaching school at Dresden Elementary, where she taught for 30 years. “Her job helped out a lot, especially in the early years, because most of the money I made farming had to be reinvested back into the farming operation to purchase machinery, land and crop inputs,” Kenneth said.

Kenneth and Janice’s first child, Angie Rushing, teaches Family and Consumer Sciences at Westview High School. She graduated from UT Martin and is married to Mark Rushing, who is an investigator with the Martin Police Department. Angie and Mark have two children, Ragan, who is a graduate student at UT Knoxville, and Reed, a 17-year-old junior at Westview.

Kenneth and Janice’s second child, Ben, is the only full-time farmer in the family. Ben is married to the former Jennifer Smethwick of Palmersville. The couple has three children – Miller a 15-year-old freshman at Dresden High; and Tyler and Tate are 12, and attend sixth grade at Dresden Middle School. Jennifer is active in the ‘wean-to-finish’ hog operation that she and Ben built in 2019, where they contract and finish hogs for Tosh Farms.

“Ben developed an intense interest in farming, from the days when he was a young boy playing with his toy tractors on the carpeted floor or planting his little crop in the fields, while eating lunch in the fields where his dad was planting, he dreamed of becoming a farmer,” Kenneth said.

“Ben was active in FFA at Dresden High School, where he served several officer positions including President of the local FFA Chapter and at the conclusion of his tenure, he was elected President of the Tennessee FFA, and traveled across the state promoting FFA at many functions.”

“Today, Ben works closely with retailers and agronomists to ensure productivity and profitability to the farm,” Kenneth said. “He is eager to try new technology, which has enhanced our operation.”

Kenneth and Janice’s youngest child, Emily, is married to Darrin Reynolds of Lebanon, Tennessee. Both Emily and Darrin graduated from Cumberland University. They have two children, Jackson, 14, and eight-year old Madison. They reside in Lebanon, where Emily teaches first grade at Sam Houston Elementary and Darrin is the Youth Pastor for Immanuel Baptist Church. “They love to visit the farm; and Madison adores the baby pigs,” Kenneth said.

“Angie and Ben have chosen to build homes here on the farm, and we enjoy the convenience and help each family provides,” Kenneth said.

“During the months when schools were shut down in 2020, the grandsons and Angie were assets on the farm. Angie is an animal lover and she enjoys checking on the cows and helping with the calving process. Miller and Reed became quite capable tractor operators and assist where needed.”

Kenneth states the 70s saw a boom in agriculture. Soybeans became the new cash crop as prices went up. Farmers were eager to buy more equipment and land to capitalize, and banks were eager to loan the money. However, he says this would prove to be a detriment, because many farmers overextended themselves. This was due in part to the embargoes being placed on exports to the Soviet Union in the 80s, which resulted in lower prices for commodities and inflation caused interest rates to go from 8 percent to 15 percent.

“This made it difficult to pay the interest, let alone the principal, on the loans they had made. Equipment costs and input costs skyrocketed also. I have said many times that the only reason I didn’t go broke was because my line of credit at that time was not large enough to cause me a problem,” Kenneth said.

“One of the most notable changes in agriculture was the introduction of no-till farming. My first experience with no-till was in 1979. I had harvested a wheat crop and decided to plant soybeans back in the wheat stubble without working the ground. After planting part of the first field, and getting on and off the tractor numerous times to check the seed placement, and thinking that this was an ugly mess, I disked around the rest of the field and burned the stubble and planted the rest conventionally.

“That fall, I saw no difference in yield where I had no-tilled and worked the ground. Since that time, we have used the no-till method of farming on the majority of our land. Not only do we save on fuel and equipment costs, the conservation merit of less soil loss due to erosion has benefited our farms.

“We try to work closely with the Soil Conservation Service to install practices on our farms to help prevent soil erosion. Over the years, planters have been perfected to do a better job with seed placement in no-till and crop protection agents have been developed that provide excellent weed control.”

Kenneth and Janice attend Church at Mount Pleasant United Methodist Church, located on Paris Highway 54. Janice is the pianist and Kenneth serves as chairman of the church’s administrative council.

The children and grandchildren enjoy returning to their family church whenever possible. Angie, Mark and Reed attend and started a Live Web Broadcast, which is beneficial to many shut-ins who are unable to attend due to sickness or age.

Ben and Jennifer are members of Dresden First Baptist Church where Ben serves on the personnel committee and Jennifer is on the children’s committee.

The Moore family has also been active in the Weakley County Farm Bureau. Kenneth is past president of the local board and Janice has served as vice chair for several years.

Kenneth has been active in the soybean industry, serving nine years on the United Soybean Board and in various capacities of the TN Soybean Board.

Farming – A Way of Life

“Farming has not only been an occupation, but a way of life for our family, for many years,” Kenneth said. “We enjoy being able to contribute to our community, interact with our landlords, and teach our children the value of hard work to make a living.” 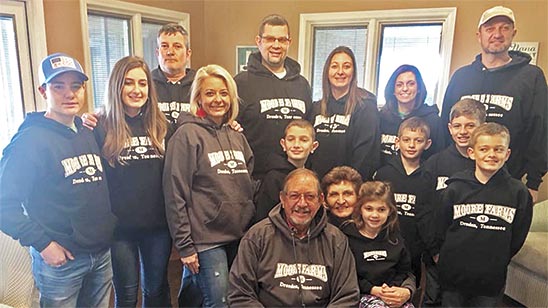 A photo of the Moore family shows Kenneth and Janice Moore (front, center), with their three children and seven grandchildren (all listed in article).