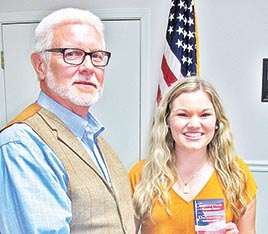 Gleason High School freshman Brooklyn McDowell, daughter of Lindsay and Jonathan McDowell, led the audience in reciting the Pledge of Allegiance during Monday night’s Gleason City Board meeting. Mayor Charles Anderson presented McDowell with a copy of the Declaration of Independence and U.S. Constitution, in recognition of her good citizenship.

GLEASON (March 15) — On March 15, the Gleason City Board, which recently changed its regular monthly meeting time to the third Monday at 7 p.m., considered an ordinance, increasing the cost to reconnect water service and the amount charged for late fees.

Another important item on the agenda included the creation of a beer board.

The board unanimously approved the second and final reading of an ordinance increasing water service reconnection fees and utility rate late fees.

The ordinance raises the water service reconnection fee from $20 to $30, providing the work is done during normal business hours; and increases the fee from $50 to $60 after business hours.

Additionally, it stipulates late fees for nonpayment of utilities by the fourth of each month will increase from 5 percent of water only to 10 percent of water, sewer and trash service.

The fee hike is due to a requirement by the State of Tennessee that municipalities operate their utilities as an expense fund, which requires sufficient user rates be charged to pay the capital and operating costs of the utility.

The second reading of an ordinance amending Gleason’s Municipal Code establishing a beer board composed of Gleason City Board members was approved by a unanimous vote. They are aldermen: Danny Browning, Wade Cook, Tommy A. Hodges and Keith Radford.

This replaces the existing Beer Board membership, which was established in 2017.

“One of our most troubled areas of the city’s sewer system is a manhole where a clay pipe runs into it at an angle underneath the Margrave building on Cedar Street across from the hardware store,” Mayor Anderson said. He stated BAM 2 has submitted bids for two different scopes of work. One involves the labor for the manhole at the edge of the Margrave building costing $3,500. The other is the labor cost for installing 135 ft. of 8-inch sewer pipe and attaching it to an existing manhole at the back of the property for $3,175. Material for both scopes of work is $2,100. This project is to be paid out of existing city funds.

He said, “We have discovered this is one of our main bottlenecks to the sewage flow from the downtown area to the lagoon.”

The mayor also mentioned there are several brick manholes installed in the 1960s, which are allowing rainwater into the sewer system. He stated these manholes must be “rehabbed and relined.”

Terrell stated there are sufficient funds left over from a CDBG grant to replace a brick-lined manhole in a curve on Phelps Street, which is 14 ft. deep. “It’s not going to cost the city anything,” Terrell said. It has three drops in it where three major pipes come into it. We’re going to have the manhole cut for 10-inch pipes and have them lined for 8-inch pipes. That way, in the future, we won’t have to replace the manhole if we decided to drop in a 10- inch main. It’ll run all the way from the lagoon to the main arteries at Phelps Street. Every drop of wastewater from the whole city, except for a few people in the subdivision where Clay Wilson lives, goes through that manhole.”

Mayor Anderson stated a larger sewer line needs to be installed from Phelps Street to Hwy 22. The mayor mentioned he has a couple of bids on the job and the city will seek a grant for the project.

Terrell noted the American Rescue Act of 2021 is going to provide Gleason with $386,872.75 in grant funding, which is earmarked for infrastructure.

The mayor stated the grant funding should be spent on the sewer system first, and if remaining funds are sufficient, consider installing new, remotely read water meters.

The board discussed whether it would be better to continue leasing a tractor or purchase a new one.

Alderman Cook stated, if the city continues to lease the tractor, the cost would increase from $6,000 to $6,600 per year. After much discussion, he recommended the lowest costing option, which is purchasing the tractor currently being leased by the city for approximately $38,000. Cook mentioned the tractor only has 200 or fewer hours on it, and should give good service for some time to come.

Mayor Anderson stated funding options must be explored before the April meeting, because a decision must be reached by May 1.

City Attorney Beau Pemberton recommended the board approve the purchase and funding method at the same time, once a decision is made as to what course of action to take.

The board accepted the resignation of City Librarian Judy Paschall, who is retiring after serving the city for the past eight years. It was mentioned she has been having health issues, which prompted her retirement.

“We wish her the best in her retirement,” Mayor Anderson said.

The individual chosen to take Paschall’s place on the library board is former Henry County teacher Anna Eaton.

Mayor Anderson stated Vice Mayor Browning would serve as the city’s representative on the board.

Roney noted there remains a vacancy on the committee, which he hopes to be filled soon.

Mayor Anderson noted, during recent icy weather, city employees spread salt at key locations around the city in the interest of public safety.

Water Department Manager Tony Terrell introduced Kevin Byrd, workforce development coordinator for the Tennessee Associations of Utility Districts (TAUD), who he described as instrumental in advising Gleason’s water department to help them remain in compliance with state and federal rules and regulations.

Byrd offered the city the opportunity to participate in an apprenticeship program to train a water operator. He stated there is a severe shortage of water and wastewater operators. To fill the gap, TAUD has developed an apprenticeship program offering high school seniors the opportunity of participating in a two-year training program to become qualified as water and wastewater operators, which involves coursework as well as on-the-job (OJT) training.

We have a dire problem across our state of aging and retiring operators,” Byrd said. “This program has been developed to help alleviate the situation.” He explained the students are tutored by experienced operators, who pass their knowledge on to their students. “We want to get that institutional knowledge before it’s gone.”

Byrd said he plans on speaking with local high school officials and attempt to initiate such a program.

“It’s a 4,000-hour OJT program involving cities hiring students, who will be working as they learn. It also requires 288 to 315 coursework hours depending on whether they’re studying for certification as a wastewater operator or water operator,” Byrd said.  “The goal for you is to have someone to stay here in Gleason. It will be under our guidance. They would work full-time and take about one class a month.”

Parks and Recreation Director Luke Hughes stated the summer ball season will soon be getting underway and local youngsters have until March 26 to sign up. He noted, this allows time to order T-shirts for the players.

Legens expressed his appreciation to aldermen Cook and Radford for their help in getting the park ready to play on. “The public has been very supportive, thus far,” he said. “Steven Scott, owner of Persimmon Hills Golf Course, is donating equipment for use at the park.”

In committee reports, Gleason Downtown Revitalization president Cruz Legens stated the organization donated flags for Mike Snider Park. However, things are currently more-or-less at a standstill, due to the pandemic.

In announcements, Mayor Anderson said he hopes to have a recommendation for a new City Recorder by the April board meeting.

The resignation of former City Recorder Angela Hunt in December 2020 resulted in a vacancy. Hunt’s position is currently being filled by Sharon City Recorder Donna Stricklin, who is a Certified Municipal Financial Officer, and a contract service provider / interim city recorder, authorized to perform those duties pending the appointment of a full-time city recorder.

Mayor Anderson said, “It’s not too soon to begin thinking about Tater Town week in September. I hope we can do that this year.” He noted the Tater Town Festival was cancelled last year, due to COVID-19.

He also mentioned planning something for the Fourth of July, such as a fireworks show and other events.

Mayor Anderson announced the dumpster at Gleason’s City Shop will be open the first Saturday of every month. He stated a city employee would be there to keep it open for public use from 8 a.m. until 12-noon on April 3. “It’ll be a cleanup day for the citizens. Things that can’t go in a trash can, may be placed in the city dumpster at that time.”

“We’re in the middle of the demolition and haul off of condemned property on West Street,” Mayor Anderson said. “It should be complete this week. City employees are using excavators and Republic Sanitation Services dumpsters to do away with the debris. We are in consultation with the city attorney concerning documentation for the condemnation and demolition of a house at 303 Phelps Street. We expect to move forward with that in the month of April. The city is on the move to condemn and demolish rundown and abandoned buildings all over town, but the legal process is sometimes lengthy.”

The mayor mentioned the heating unit at the water plant, which was installed in 1990, has failed and must be replaced before winter. He added Gleason Hardware has submitted two quotes for heaters from different manufacturer – one for $3,900 and another for $4,600. At the suggestion of Alderman Cook, the board agreed to get a couple of more bids before purchasing a heating unit.

Gleason High School freshman Brooklyn McDowell led the audience in reciting the Pledge of Allegiance during Monday night’s Gleason City Board meeting. Mayor Anderson presented her with a copy of the Declaration of Independence and U.S. Constitution, in recognition of her good citizenship. Brooklyn is a member of the FCCLA, FCA, Beta Club, G-Club, and Student Council. She is also Student Council Representative for the freshman class. Brooklyn was a Gleason High School cheerleader this year, and will be again, during her sophomore year. Brooklyn says she enjoys spending time with her family and friends. She is also very active with the First Baptist Youth Group.