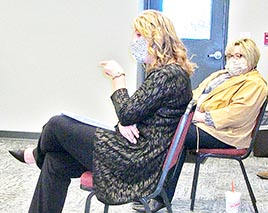 DRESDEN (March 11) — One of the top items for discussion during Thursday’s Finance, Ways and Means Committee meeting at the School Department Conference Room in Dresden involved revising the county’s method of collecting and depositing building permit fees.

After much discussion, the committee voted to revise the wording of the Private Acts, to indicate the trustee is responsible for managing building permits – not the director of emergency services.

Additionally, the amended document changing the county official responsible for collecting building permit fees from the director of emergency services to the county trustee, was unanimously approved by the committee.

Section 2 of the original document reads: “This act shall not apply to the erection, construction, reconstruction or alteration of buildings or other structures in cities requiring permits for the same, providing that copies of such permits are made available to the director of emergency services.” It was amended to state “permits are made available to the assessor of property.”

It also stipulates the proceeds from the building permit fees, costing $25 each, are to be collected by the trustee and deposited in the highway fund, instead of the general fund.

Commissioner Gary Eddings stated electrical hookups at construction sites are not provided, unless a building permit is obtained.

Anyone who is building a new home, adding new additions to a home, moving a mobile home, or putting in an in-ground swimming pool must purchase a building permit.

For more information concerning building permits, contact the Weakley County Trustee’s office at 731-364-3643, email the trustee at wctrustee@frontiernet.net or check out their web page on the on the Weakley County Government website at https://www.weakleycountytn.gov/ and use the menu at the top of the page to find the trustee’s page. Just click on “DIRECTORY” then “OFFICIALS” and cursor down to find the trustee, then click on “WEBPAGE.” The building permit procedures may be accessed by clicking on the “Building Permit” icon at the bottom of the page.

In other business, the committee unanimously approved a resolution authorizing amendments to the Weakley County Highway Fund budget for fiscal year ending June 30, 2021.

Road Supervisor Charles Ross said he budgeted $350,000 to purchase two new tractors with booms (to mow right-of-ways along rural county roads). He stated the tractors cost approximately $78,000 less than expected, and requested he be allowed to use some of the excess funds to purchase much needed equipment.

Ross proposed using these funds to purchase a water truck costing $44,000. Additionally, Ross stated, he needs to replace a semi-tractor with a broken frame.

The committee approved a Highway Department budget amendment transferring $45,000 out of funds set aside for road materials and placing it in the line item for pipe.

Ross explained, part of the reason for the budget transfer is due to the construction of a temporary structure at Salem Bridge, and other unanticipated use of pipe that leaves little money in the budget to purchase pipe.

Ross gave committee members an update on construction project at the Highway Department saying, he recently expressed his displeasure with the contractor concerning the slow pace of completing the project.

“They’re not there working everyday, but they need to be,” he said. “Hopefully, we’ll get better results from them now on.

“The shop is about 99 percent complete.”

He said, “We’re handicapped now because our parts and telephones are a long way from the new shop.”

Ross noted the contractor informed him the new offices would be ready to move into within three weeks.

“There’s not that much work left to do Ross said. “I’m more concerned regarding renovations in the parts room, service manager’s office and restrooms.”

Although construction is coming along slowly, Ross says he is pleased with the quality of work. “I’m excited about it. The new shop is awesome. It’s so much roomier and well lit. I’m really proud of it and thankful for it. I know the employees are too.

Director of Weakley County Schools Randy Frazier addressed the status of the School Department’s garage, which is part of the overall construction and renovation project. Frazier stated he spoke with Construction Manager Cary Henson on Wednesday, March 10, and Henson estimated the work should be completed by June or July of this year. He added, “The new bay will allow us to transfer motors in a more efficient manner.” This is because the ceiling is too low to pull bus motors out the top of the engine compartment, so engines must be removed by lowering it out the bottom, making the job more difficult and time consuming.

Weakley County Clerk Kim Hughey requested the committee transfer $16,595 out of a reserve fund for automation and place it in the line item for data processing equipment.

Hughey explained her office has received a new computer program from the State of Tennessee’s software provider that is not compatible with her current computer server, which is too old to handle the new program. She also mentioned the software is not compatible with any of the six credit card readers currently used in the clerk’s office. The server and credit card readers are approximately 10 years old.

“The company supplies motor vehicle computer software for the entire State of Tennessee,” Hughey said. She stated a server was loaned to her office until a new one can be procured.

The committee approved the above resolutions, which were recommended for approval by the Weakley County Commission during its Monday night meeting.

All of the above-mentioned resolutions and Weakley County Private Acts’ amendments were approved by members of the county commission during its quarterly meeting held Monday, March 15 at the Weakley County Professional Development Center in Dresden.