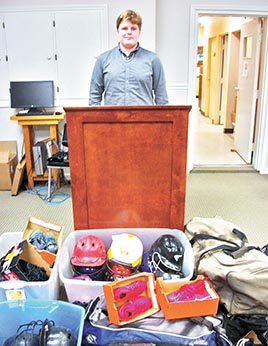 Gleason High School student Ayden Bennett was recognized for soliciting donations of new and used baseball equipment, which totaled: 40 bats, 20 helmets, 10-pairs of cleats and two sets of coaching gear. Ayden initiated the project to make it possible for more children to play on a Summer League Baseball team.

GLEASON (February 25) — Gleason City Board members approved several ordinances and resolutions, during Thursday night’s board meeting including: a hike in the cost to reconnect water service and the amount charged for late fees; the creation of a beer board; and the residency requirements for the job of city recorder.

The board unanimously approved the first reading of an ordinance increasing water service reconnection fees and utility rate late fees.

The ordinance raises the water service reconnection fee from $20 to $30, providing the work is done during normal business hours; and increases the fee from $50 to $60 after business hours.

Additionally, the ordinance stipulates late fees for nonpayment of utilities by the fourth of each month will increase from 5 percent of water only to 10 percent of water, sewer and trash service.

The fee hike is due to a requirement by the State of Tennessee that municipalities operate their utilities as an expense fund, which requires sufficient user rates be charged to pay the capital and operating costs of the utility.

Mayor Anderson also discussed the future purchase of new electronic water meters that can be read remotely from Gleason City Hall. He stated this would help identify water leaks early, so homeowners can be quickly notified to repair their water leaks, before the water loss runs up a water bill.

The first reading of an ordinance establishing a beer board was approved by a unanimous vote.

The ordinance amends Gleason Municipal Code establishing a beer board composed of Gleason City Board members.

The ordinance reads, “A chairman shall be elected annually by the board from among its members.”

It also notes Gleason Beer Board members will serve without compensation.

Following a public hearing, the board unanimously approved a resolution on second and final reading, amending Gleason’s City Charter, to eliminate the requirement that the city recorder reside within the urban growth boundary of Gleason.

This step was taken to fill the office in case there are no qualified applicants meeting the residency requirements.

The City Recorder is the only position that currently requires the person hired for the job to reside in the urban growth boundary of Gleason.

The charter change was necessitated by the resignation of former City Recorder Angela Hunt in December 2020, and there were no applicants that met the residency requirement to take her place.

Hunt’s vacated position is currently filled by Sharon City Recorder Donna Stricklin, who is a Certified Municipal Financial Officer, and a contract service provider/interim city recorder, authorized to perform those duties pending the appointment of a full-time city recorder.

The board approved an $8,598 bid from All Star Fence Company for a new gate system to be installed at Gleason’s City Shop. The mayor stated it has twice the horsepower as another gate system that was also bid for the project. Additionally, it’s reinforced, stronger, and has 10 remote controls for city employees to open and close the gate. The gate will also control access to the city’s public dumpster located inside the fence.

Alderman Wade Cook suggested the possibility of having a monthly clean-up day for citizens to come and place items in the dumpster, while a city employee is present to make sure those dumping are Gleason citizens and they are dumping allowable items (no hazardous materials).

The option of adding another dumpster was discussed; however, it was noted each additional dumpster costs $750 per pickup.

On the recommendation of Alderman Keith Radford, the board voted to allow public access to the dumpster the first Saturday of every month from 8 a.m. until noon.

Mayor Anderson noted, despite the national economic downturn, due to COVID-19, local sales tax collections have been very good.

To help those in need, as well as the City of Gleason, the mayor announced he is donating his salary to purchase food vouchers redeemable only at Gleason Superette grocery. As mentioned in past meetings, by shopping locally, the money is kept in Gleason and helps boost the local economy.

In Department reports, Police Chief Paul Eddlemon stated Gleason officers are now back on full patrol, due to declining COVID-19 numbers. However, there are still restrictions at the Weakley County Detention Center.

Chief Eddlemon stated renovations of the building where the Gleason Police Department will be located are continuing, and plans call for moving into the new office during the second week of March.

Mayor Anderson said, once the new building is ready for occupancy, there will be a grand opening.

In the public works report, Mayor Anderson said, “The past two weeks have been hard on everyone.”

He mentioned freezing temperatures resulted in burst water pipes throughout the city. “We’re going to have customers with high water bills, due to these leaks,” Mayor Anderson said. He mentioned giving customers a one-time per year adjustment on their water bills. “I really want to stress, with weather like this, citizens need to keep an eye on their water.” He noted, if leaks involve pipes belonging to the city, municipal workers will repair them, but water customers are responsible for fixing leaks on their property.

Mayor Anderson said all city employees “went the extra mile” in helping to overcome the problems during the ice/snow storm and freezing weather.

In the Water Department report, Water Department Director Tony Terrell displayed a photo depicting the problem of tree roots getting into sewer pipes and creating blockages. One example was that of an eight-inch diameter, four-foot long, root-ball. “That’s what we contend with every day,” Terrell said.

He stated, most of the work funded by the most recent Community Development Block Grant, is completed. “There is still a little dirt work to be done. We’ve got to fill in some holes that have settled and put out some grass seed. We still have places on Phelps Street and Haynes Lane that are still being worked on. We have a manhole that’s 13-feet deep. It was on the grant schedule to be relined. But that is an exterior drop manhole that has another line coming into it that drops into the manhole. It can’t be rehabbed because of the cracks and roots in the system. We’re going to see where we are on the last of the grant funding and probably go ahead and completely replace that. It’s a major artery of the city.” Terrell stated he is waiting to get prices to replace the components, and an engineer to look at it before he proceeds.

“We’re going to work hard to get the park back to where it should be,” Legens said. “I think I have a lot of people who are willing to help.”

“We’re trying to bring the park back up to where we can have tournaments there,” Mayor Anderson said. He stated the city will be pressure-washing the concession stand and restrooms, painting the doors and adding gravel around the concession area.

Legens recognized the efforts of Gleason High School sophomore Ayden Bennett, son of Ron and Paige Bennett, for a project he initiated to make it possible for more children to play on a Summer League baseball team. He stated Ayden overheard a local youngster say he wanted to play, but couldn’t because he couldn’t afford a bat. Ayden immediately began soliciting donations of new and used baseball equipment, and thus far, 40 bats, 20 helmets, 10-pairs of cleats and two sets of coaching gear have been donated. These items were turned over to the Gleason Parks and Recreation Department for the city’s summer baseball program and were on display in Gleason City Hall’s boardroom. “He did this on his own,” Legens said. “We want to encourage other kids to do things like this young man did.”

Ayden took the opportunity to thank everyone for the donations.

The audience showed their appreciation for Ayden’s efforts by giving him a resounding applause.

One of the changes brought to Gleason’s City Board meetings by Mayor Anderson is having a local student lead the group in reciting the Pledge of Allegiance.

This month’s good citizen recognition went to Zoe Healy, 9, daughter of Kim and James Healy and granddaughter of Cindy Reynolds. Zoe led the audience in reciting the pledge during Thursday night’s Gleason City Board meeting. After, Mayor Anderson presented Zoe with a copy of the Declaration of Independence and U.S. Constitution, in recognition of her citizenship.

Zoe is a student in Amy McKenzie’s fourth-grade class at Gleason School, and is highly accomplished in the classroom and athletics. She is a BETA member. She also won seven gold medals and two silver medals at her last gymnastics meet as a member of the MEGA Gymnastics Team. Zoe says she enjoys jumping on her trampoline and playing with her dogs Jake and Tank. She is also a member of Tumbling Creek Baptist Church.

The next meeting of the Gleason City Board is 7 p.m. Monday, March 15. 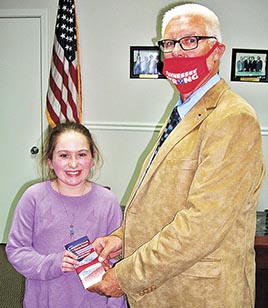 Gleason fourth-grader Zoe Healy, daughter of Kim and James Healy, led the audience in reciting the Pledge of Allegiance during Thursday night’s Gleason City Board meeting. Mayor Charles Anderson presented Zoe with a copy of the Declaration of Independence and U.S. Constitution, in recognition of her citizenship.