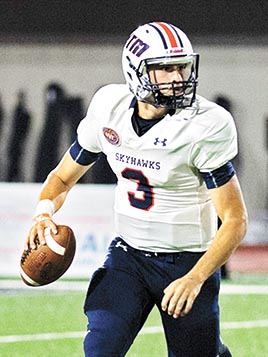 BRENTWOOD (February 28) – University of Tennessee at Martin junior Dresser Winn was honored by the Ohio Valley Conference as the league’s OVC Specialist of the Week after an outstanding performance in the punt game against Murray State in the season opener Sunday, February 28.

A native of Dresden, Winn served as UT Martin’s punter for the first time in his collegiate career against Murray State. He tallied seven punts for 299 yards, averaging 42.7 yards/per punt with a game-long of 58 yards – the longest punt by a Skyhawk since 2017. Three of his punts went for 50 yards or more and three were down inside the 20-yard line, with zero touchbacks. He made it difficult for the Racers offense all day, including pinning a pair of punts down on the two-yard line.

Winn and the Skyhawks will make their home debut Sunday, March 7 against Eastern Illinois. Kickoff from Hardy Graham Stadium is at 1 p.m.