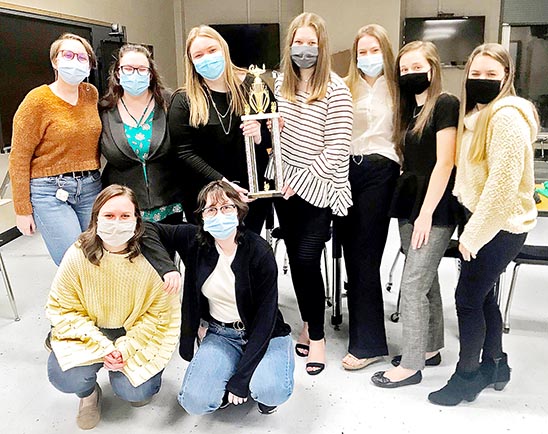 Another trophy graces the halls of Dresden High School thanks to students who “train” by researching and discussing what they find.

Last month seven students represented Dresden in the Regional High School Ethics Bowl. Though virtual, the event still included the presentation of case questions that teams had to defend or oppose and then respond to additional questions posed by judges. Played in four rounds with two teams competing each round, the day stretches from 8 a.m. to 6 p.m.

Topics featured ranged from factory farms to “cancel culture,” from the pros and cons of charitable giving to the implications of reopening schools during a pandemic.

The National High School Ethics Bowl was founded in 2012 as the product of a partnership between the Squire Family Foundation and the Parr Center for Ethics at the University of North Carolina at Chapel Hill, with generous support from GlaxoSmithKline.

The NHSEB’s aims and ideals at the time of its founding were essentially three-fold: (1) to take seriously the contribution that teenagers make as members of their communities, (2) to cultivate skills and virtues central to democratic citizenship, and (3) to prepare students to navigate challenging moral issues in a thoughtful and open-minded way.

In the last year of the national competition, more than 4,000 students from 327 schools participated.

“I am very thankful we were able to compete this year and bring home the regional win for the second year in a row,” said King. “I’m looking forward to the next round.”