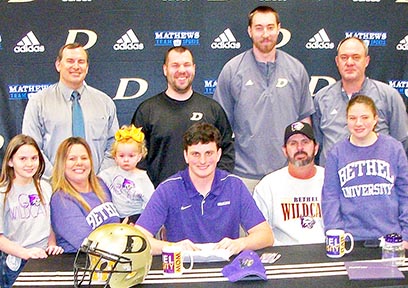 DRESDEN (February 23) — On Tuesday, February 23, coaches, family members and friends congratulated Dresden High School football standout Logan Taylor for signing with Bethel University, after he was offered a football scholarship to play for the Wildcats.

Logan received several awards for his accomplishments, including:

This fall, Logan will be trading in his #62 Dresden Lions football jersey to don the uniform of a Bethel Wildcat.

According to Lions Head Coach Wes Johnson, Logan will be playing tight end for the Wildcats.

“He didn’t play tight end for us, but I think he’s going to fit well at the college level in that position. That’s what they saw him as. We’re so happy for him. He was the leader of our team. He played offense, defense and special teams. We couldn’t afford to be on the field without him. I can’t say enough about him academically and athletically.

“Logan runs really well, and I think that’s why they want him to play in the tight end position,” Coach Johnson said. “He can run and block, and a tight end is a really versatile position now in a college game. He can block and run routes and has a lot of different skill sets. He’s just a great young man and I’m happy for him and his family. Coach Jasper and the staff at Bethel University do an awesome job recruiting. Dresden High School has a rich tradition of players continuing their careers with the Wildcats, and I can’t wait to see more Dresden lions join him at Bethel in the future,” Coach Johnson said.

“It’s been a great four years at this high school,” Logan said. “The teammates and coaches I’ve had have been great. It’s the most fun I’ve ever had,” he added.

He described his experience as a Lions football player as life changing. Logan added it made him and his teammates the men they are today. “I can’t wait to go to Bethel and compete at the next level to see what I can do.”

Logan’s dad, Jason, said, “I’m very proud of him. Ever since he was four-years-old, he’s been playing football. He has really strived these past few years to get to the point where he can play college ball. I’m very appreciative of Coach Johnson also. He’s the one who really pushed him and got him over the edge.” Mr. Taylor stated it’s great to see how far his son has progressed.

Logan’s mom, Sandra, said, “We really enjoy Dresden High School football. The coaches here have been fantastic.” She stated Logan has performed really well, especially the past two years. “He has really grown and learned a lot, because of Coach Johnson. We’re really eager to get to the next chapter and see what’s going to happen next.” Mrs. Taylor stated Logan received a good scholarship at Bethel, so he’ll be attending a local university. “We’ll get to go and watch him play, and we love that,” she added.

The signing and a reception were held in Dresden High School’s library.