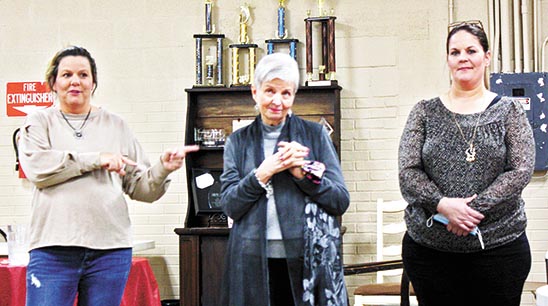 DRESDEN (March 9) — After being inactive for the past couple of years, the Dresden Business Association is getting back to business. The group is kicking off the spring season with the “St. Patrick’s Day Party On The Square,” scheduled to take place Saturday, March 20.

This will be a welcome break for local citizens, who have been cooped up inside their homes much of the time for the past several months, with limited opportunity to socialize with others or participate in community activities, due to COVID-19 restrictions.

Dresden Business Association organizers are anticipating a good turnout for the celebration, which will offer a variety of fun-filled events for the whole family.

Thus far, 32 businesses around Dresden have signed up to support the all-day event.

There will be valuable prizes awarded in some of the competitions. The first-place winner in the Car Show will receive half of the money collected in entry fees. The person touching the trailer the longest in the Touch a Trailer event wins a trailer. The competitor rocking the longest in the Rock-a-Thon wins a $250 prize.

To register for events, call 731-393-1162 or email dresdenbusiness2021@gmail.com or dresdenbusinessassociation.com. The DBA also has a Facebook page where events are updated. (See Contest Rules for entry deadlines, entry fees, and terms of contests.)

Association President Sandra Taylor stressed children need to have regularly-scheduled activities that interest them. She stated this would encourage people to come and help grow Dresden. “We have a lot of room for growth. A lot of people leave Dresden and go shopping in Paris, Jackson, McKenzie and other areas. But, we want people to come here and shop. We want to give them a reason to come here. That’s why we decided to have such a large event on March 13. We want to show people we have fun activities for people of all ages.

“We’ve been working with Dresden Mayor Jeff Washburn quite a bit and he wants to see more things done, as well,” Taylor said. She stated the Dresden Business Association is partnering with Mayor Washburn, and he’s doing everything he can to help Dresden grow. That’s what it’s going to take – people in the town, like him, to get people to come here and have things for the family to do.

“This summer, there will be a big-screen, drive-in movie theatre sponsored by the Weakley County Prevention Coalition program,” Taylor said. “It will be held every Saturday, during June and July, in front of Reggie’s Barbecue on Highway 22 in Dresden. The movie, as well as drinks and snacks, will be free,” she noted.

Taylor stated some people think the Dresden Business Association is just for the downtown businesses, but it’s really for all Dresden businesses.

“We’re not going to have all of our events on the square. We’re going to go out in the community and have activities along Highway 22, toward Martin and toward Huntingdon. We’re going to be in the E.W. James parking lot, at the Fred’s building. We’re going to open it up to all of the businesses,” Taylor added.

Klutts states the association is having a membership drive and offering new members six months membership free, if they sign up by the end of March. After, the fee is $100 per year for a business to join.

“We have a website and Facebook page, and we’re going to promote those businesses that join our group. We’re going to have a presence everywhere we possibly can.” She added the association will sponsor a lot of family-oriented, community activities to promote the City of Dresden.

Last year’s 41st Annual Tennessee Iris Festival in Dresden, which was scheduled to be held April 25 through May 2, 2020, was canceled due to COVID-19 restrictions. However, planning is underway to host the event this year.

During Monday night’s meeting of the Tennessee Iris Festival Executive Board, members discussed events and information for the 2021 Iris Festival. The board set this year’s Iris Festival for April 24 through May 1.

A schedule of events will be released at a later date.

The annual Easter Parade (sponsored by the Dresden Business Association), which was first held in 1980, and renamed the Tennessee Iris Festival in 1985 to honor the state flower, was held during the first weekend in May.

The initial purpose of the Easter Parade and eventual Iris Festival was to bring people from outside of Dresden to visit the town and to encourage their business there.

Dresden Business Association founding member, Klutts, who worked at People’s Bank (now BancorpSouth) in Dresden from May 1978 until 1983 as director of community relations, recalls how and why the association was formed.

It was Klutts’ idea to form the Dresden Business Association in the fall of 1978. “We had a reception in our boardroom located in the basement of the bank,” Klutts said. “We invited everybody to come and we had a big crowd. We talked about getting all of the businesses in town to join the association and promote Dresden. That’s what we did, and it was extremely successful.”

Members of the newly-formed Dresden Business Association discussed ways to promote business in the community.

“In January of 1979, we had a meeting and were trying to think of something we could do in the spring, so I mentioned having an Easter Parade,” Klutts said. She suggested the Pilot Club ladies could lead the parade, all dressed in their finery and wearing their Easter hats, while singing, “In Your Easter Bonnet.”

“We put it together and had widespread cooperation,” Klutts said. “Every church in this town built a float, and every business either built a float or joined with other businesses to build a float.”

Dresden’s Tennessee Iris Festival Executive Board now manages the festival, which has continued to grow and attract groups from across northwest Tennessee.