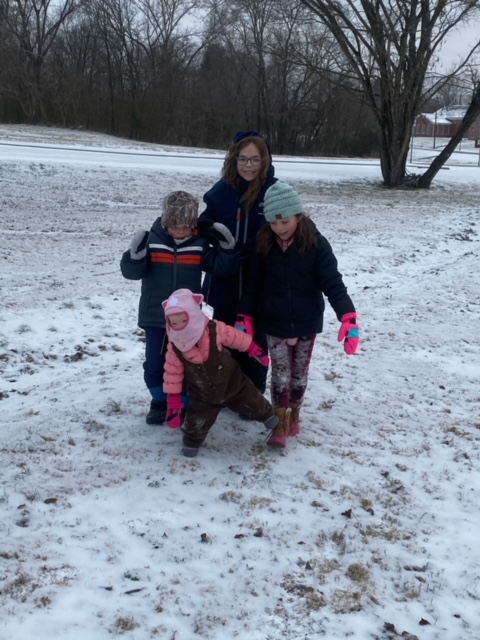 John, Abby and Emma Green of Dresden enjoyed the winter wonderland that blanketed the region over the last two weeks.

WEAKLEY COUNTY (February 22) — Warmer temperatures over the weekend helped melt the snow and ice off roadways, making travel safer for thousands of motorists eager to get out of their homes, after being cooped-up the past several days. Also, high temperatures are forecast to be in the upper 50s this week.

According to Weakley County Emergency Management Director Ray Wiggington, last week’s winter storms coated streets and sidewalks across the region with a solid sheet of ice and blanketed the landscape with 7.8 inches to 10.9 inches of snow in the Weakley County area. The wintery mix was even worse in other parts of the state.

Approximately three quarters of the nation was covered by snow generated by the winter storm, which created hazardous driving conditions and cancelled thousands of flights.

Monday morning, Weakley County Highway Department Supervisor Charles Ross said, “As far as snow removal, we’re still working on some back roads that are shaded. But, the biggest part of it is cleared and melted. A little shower last night helped. We’re still doing some blading today. We started after the first snowfall, and we’ve plowed every day since. Sunday was the last of the major plowing days.”

“We worked during the daylight hours,” Ross said. “That’s the only way to be safe and not tear up equipment.”

However, Ross stated there were a few instances where equipment got stuck, and a roadgrader was slightly damaged. Fortunately, there were no injuries. “Overall everything went pretty well,” Ross added.

According to the Tennessee Department of Transportation, TDOT crews were kept busy clearing snow and ice from most state-owned roadways in West Tennessee. TDOT workers salted and bladed road surfaces with everything in their arsenal, including: bulldozers, road graders, front-end loaders and salt trucks equipped with plows.

“TDOT has cleared all of their roads and they’re looking great,” Ross said.

TDOT spokesperson Nicole Lawrence said, “This was a Regional event, meaning every one of the 21 counties we take care of saw snow and ice. The northwest part of Tennessee saw in total, from the first round to the third round, an estimated 10-14 inches.

“We were in the single digits, with a wind chill at or near 0 degrees at one point.

She stated workers began salting road surfaces on Thursday, February 11, in preparation for the first round of ice, and continued around the clock until Monday, February 22.

From the evening of Sunday, February 14 through the morning on Friday, February 19, TDOT has used approximately 18,000 tons of salt and logged over 99,000 miles clearing and treating roadways across 21 counties in west Tennessee.

Ms. Lawrence reports, approximately 300 TDOT employees worked around the clock in shifts from Feb. 11-22, to clear state highways. She states, over the weekend, crews came in normal hours to finish cleaning up any secondary routes, ramps and crossovers.

TDOT is also preparing for pothole response. Potholes form when moisture seeps into the pavement, freezes, expands, and then thaws, leaving a void that eventually caves in under vehicle traffic.

For the latest on road conditions, check TDOT SmartWay before you go: https://smartway.tn.gov

The frozen precipitation caused numerous auto accidents. According to the Weakley County 911 office, most of these vehicles slid off roadways into ditches, but only caused minor damage. Tow truck operators struggled to keep up with demand in the West Tennessee area.

The majority of accident victims suffered only minor injuries; however several fatalities were reported in Tennessee and across the nation.

According to Weakley County 911 Director Christy Fulcher, 20 motor vehicle accidents were reported during the past week. Many of them were weather related.

From Monday, February 15 through Monday, February 22, Weakley County 911 operators dispatched police, fire, rescue, ambulance and other emergency personnel to the scene of various accidents. They worked in sub-freezing temperatures to evacuate accident victims and get them the medical help they needed.

During this time, there were: four wrecks in Dresden; six traffic accidents in Martin; two in Gleason; and six in Greenfield. Weakley County also responded to a mutual aid call in South Fulton.

Director of Weakley County Schools Randy Frazier stated he hoped to reopen schools on Monday, February 22, but couldn’t because the roads in the northern part of the county were not passable.

He noted, the rest of the county is fine, but rural county roads in the Palmersville, Dukedom, Latham and Ralston areas have not had as much traffic and blading, therefore, they were still too dangerous to travel.

“We’re out of snow days, so whatever we miss, we’ll have to make it up,” Frazier said.

Weakley County Municipal Electric System Director Faron Collins reported, “We haven’t had much of a problem at all. However, Sunday morning, we had a circuit to Martin off for about an hour, when one of the phase wires broke loose from the insulator which knocked the line out.” However, he noted the power outage was probably not weather related.

Weakley County Mayor Jake Bynum said, “As far as county facilities are concerned, we didn’t have any damage, such as frozen water pipes or anything like that. The reason we closed or were only open appreviated hours was strictly for the safety of our employees and constituents trying to vist those facilities.” He stated county offices were open limited hours on Wednesday, February 17 and Friday, February 19, but were closed completely on February 11, 16 and 18.

With the exception of emergency and other services, most other county offices were closed during the past week.

According to Dresden Postmaster Joe McCroskey, the reason local mail was not delivered Tuesday through Friday of last week, was because U.S. Postal Service trucks were stuck in Memphis, due to the ice and snow.

“We finally got a truck in Saturday morning,” McCroskey said.

“We were told the trucks couldn’t get in and out of the General Mail Facility parking lot, because the City of Memphis had not yet cleared the roads around the plant.

“Our local postal employees showed up every day,” McCroskey said. He stated, if there was any local mail, it was delivered as usual. However, the majority of the mail, which is routed through Memphis, was still at the General Mail Facility.

He noted, rural mail delivery vehicles are equipped with four-wheel drive, and city delivery vans have wire on the tires (instead of chains).

McCroskey, who serves as postmaster for Dresden, Gleason, Palmersville and Dukedom, said, “We have six rural routes and one city route in the Dresden area, as well as one mail route in Palmersville,” he said.

McCroskey stated there has only been one time, during the 10 years he’s worked at the Dresden Post Office, that the trucks failed to deliver mail.

Solid waste pickup in parts of Weakley County is behind schedule, due to slippery roadways caused by last week’s winter storm, and garbage trucks are in the process of catching up this week.

The exception was the City of Dresden, which had its garbage picked up by Red River Waste Solutions on Friday February 19, as usual.

According to Martin Community Economic Development Director Brad Thompson, Republic Services garbage trucks couldn’t run Monday through Thursday of last week, due to hazardous driving conditions, but resumed pickup on Friday and worked through the weekend to catch up.

Gleason, which uses Republic Services did not run Wednesday of last week, which is their normal garbage pickup day. But they are running their route this Wednesday, as usual.

Waste Management failed to run their garbage pickup route in Greenfield last Monday and Tuesday, but plan to resume services this week.

Republic Services, which has the contract for the City of Sharon, was unable to pickup garbage last Wednesday. However the waste disposal company is supposed to run the route on Wednesday, February 24.

The weather outlook for Weakley County calls for high temperatures in the 50s and mid-60s and lows in the 30s and 40s through the weekend.

Heavy rain showers and possibly some storms could return to West Tennessee on Friday and another storm system will return on Sunday. Between the two storm systems 2-3 inches of rain could fall across the area.