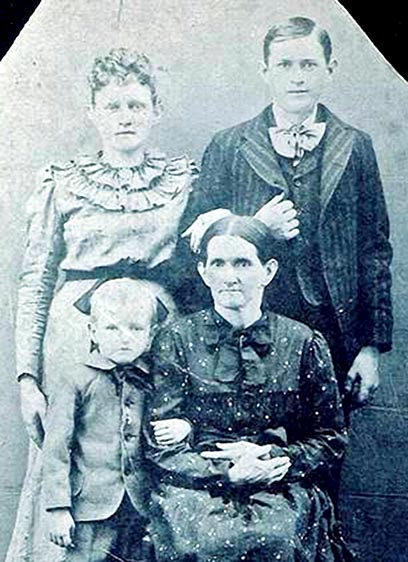 This photo, dated 1894, is a family photo of who are said to be the second owners of Billingsby Farms, a farm near Latham recently designated as a Century Farm. Pictured are Betsy Hawks, widow of G.L. (Fate) Billingsby; Ayler (Brundige); J.R. (Bud) and young G.L. (Gib).

Warren was described as high-tempered and eccentric, and patrolled the fence lines to make sure Fate’s hogs didn’t trespass on his property. When Warren and Eliza died childless, his portion passed to Fate. At Fate’s death in 1889 and Betsy’s in 1898, 22 -year-old Bud took Gib, his younger 10-year-old brother, and hired out to the Harris family for room and board. One of their chores was drawing water for the livestock.

Many of the poverty-stricken settlers had few possessions, couldn’t read or write, and fought desperately for survival. It was told that Fate, who didn’t own a gun, hid out in the top of a tree, waiting for a deer to appear. He lunged down on top of the frightened animal, stabbing him with his knife, reportedly losing most of his clothes in the ensuing battle. Fate died at the age of 52 after

threshing “some of the sorriest sorghum he had ever seen,” and contacted pneumonia.

When the war ended in 1865, the South was physically and financially destroyed. They suffered through a dozen years of Reconstruction. Lincoln’s plan of ‘malice toward none and charity for all’ died when he was assassinated just after the war ended and he had been re-elected for a second term. The radicals in charge of the Republican party refused to cooperate with Tennessee’s President Johnson, who hoped to follow Lincoln’s peaceful plan for Reconstruction.

In 1911 when William Taft was president, Gib married lovely Ida May Crosser who lived on a nearby farm with her brother, Ken Crosser and his wife, Sue Levister. Gib purchased additional acreage to provide better access to the road, where he built a house. He and Ida raised a family of eight children: Flavil, Howard, Dink, Polly (Walker,) Reggie (Roney,) Anna Lou (Killebrew Story) John and Sue (Harper.) Bud never married and lived most of his life with Gib and Ida.