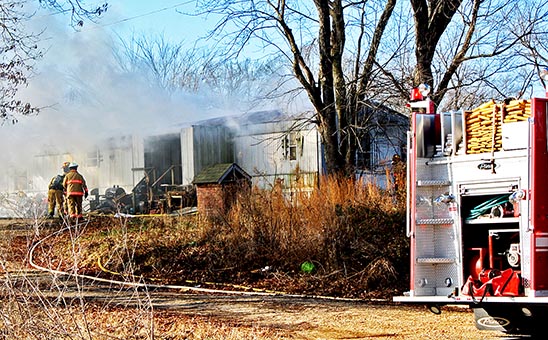 Three agencies worked to extinguish a residential fire on Kimery Store Road in Greenfield Friday morning that remains under investigation. The Sharon and Bradford fire departments assisted Greenfield as they worked to knock down the blaze, providing pumpers as they shuttled water within a four-mile radius to the scene. No one was injured in the fire. Photo by Sabrina Bates/The Enterprise

GREENFIELD (February 5) – A trailer fire on Kimery Store Road in Greenfield is under investigation by multiple agencies after it broke out in the living room of the home Friday morning around 9:18. Greenfield Fire Chief Bob Dudley said his department was on the scene with a pumper and pumper tanker within four minutes of receiving the call.

The Sharon and Bradford fire departments provided tankers to help shuttle water within a four-mile radius to the scene of the rural fire. The fire was knocked down within about three hours, while another three were spent investigating the cause. The fire remains under investigation by the Tennessee Bureau of Investigation, Greenfield police and fire departments and the Weakley County Sheriff’s Department.

It took approximately 20,000 gallons of water to extinguish the fire.

The occupants of the residence were not at home when the fire started and no on injuries were reported in the incident.

“I just want to say both (Pence and Rodriguez) did a great job getting this fire knocked down at the scene. It was a quick knock down and no one was injured. I appreciate the wonderful job they do and all of the help from other agencies that day,” Dudley said.

Other agencies responding to the scene included the Weakley County Ambulance Service and Tennessee Division of Forestry.