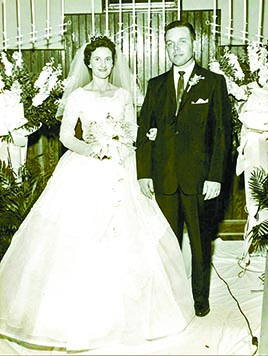 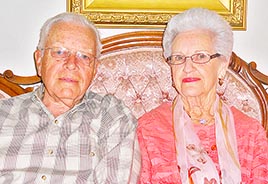 Clarence Moore, Jr. (Junior Moore) who is now 93 years old, and Winnie Snead Moore, 89, have been married for the past 58 years.

When asked what is their secret for being happily married for so many years, Junior said, “Give and take. We don’t have any problems at all. That’ll work with any couple.”

Winnie said, “Junior is someone who remembers every special occasion.” He always gives her a Valentine’s Day card, and usually flowers or some other gift to let her know she is still his sweetheart. She says, he never forgets to give her cards and gifts on special holidays, including their anniversary, and Christmas.

“The year LeAnne was born, he gave me a gift and it was a cross, and I still have it today,” Winnie said. “I wear it and LeAnne does too.”

She described Junior as being a very kind, considerate and loving husband.

He grew up working on his parent’s farm in the Ore Springs community.

“My daughter bought my old home place, where I grew up, just north of Ore Springs,” he said. “That brings back memories.” He states it’s a log house, and although no one lives in the residence, it still stands.

Junior recalled attending Central High School through the eighth grade. He rode to school and back in a horse-drawn wagon. On cold mornings, his mother would heat a brick for him to put underneath his feet to help keep him warm. There was a stable at the school to shelter the horses, while the children were in class.

The first year Junior attended Dresden High School, his father carried him to and from school in a wagon pulled by a pair of mules.

He recalled, when the roads were extremely muddy, four mules were required to pull the wagon instead of two.

During his sophomore year, Weakley County hired someone to carry children from the Ore Springs area to Dresden High School in the back of an old tarp-covered truck.

A school bus was provided for transporting students to and from school, during his junior and senior years.

Junior was active in sports and enjoyed playing basketball. He received his diploma from Dresden High School in 1945.

After graduating high school, Junior and several other young men played on an independent basketball team formed in Dresden called the Dresden Blackhawks. “We played a team out of Arkansas that was supposed to be really good,” Junior said. “They came to Dresden to play us, and there were so many people who came to watch the game, we had to turn people away. We couldn’t seat them all. We won the game by one or two points.”

The Dresden Blackhawks won the state tournament and went on to compete in the national competition. However, he said, “We lost to Kansas State.”

Junior earned a business degree at Bethel College, where he graduated in 1964.

During her college days, Winnie was active in several academic organizations at the University of Tennessee at Knoxville. She graduated from UT Knoxville in 1952, with a degree in home economics, and an elementary and secondary education certificate for grades K-12.

“I first met Junior at the City Café in downtown Dresden in 1954, while I was having lunch,” Winnie said.He came in and somebody introduced us.”

They started dating a few years later. Their first date was at the Varsity Theatre in Martin. “We had a movie theater here in Dresden, but it was only open on certain days,” Winnie said. “We also used to go out to eat a lot.”

They were married on April 22, 1962, at Shiloh Cumberland Presbyterian Church in McKenzie. Winnie’s parents, Baker and Dathel Snead, held a reception at their home, located just outside of McKenzie on the Old Paris Highway. “Our old home place is still there, and we still have the farm,” she said.

Winnie stated she and Junior spent their honeymoon in New Orleans, Louisiana.

The couple’s first home was where Gingerbread Junction is currently located on Linden Street. Winnie stated they later moved to a nearby house on Parkway. Finally, the couple built their current residence on South Parkway in 1968.

“That was a sad time for us, but we’ve had many happy memories over the years,” Winnie said. LeAnne married Colin Johnson and the couple gave Junior and Winnie their first and only grandchild – Anna Johnson, who is attending Rhodes College in Memphis, Tennessee. Anna, who is now 20, was an award-winning runner when she was a student at Dresden High School, and is a member of the cross-country team at Rhodes.

Junior served in the U.S. Army during the Korean War Era.

In civilian life, Junior worked in the shipping department at Bay-Bee Shoe Company for approximately four years. During this time, he worked with Ned R. McWherter, who was later elected to the Tennessee House of Representatives (1973 to 1987) and served as the 46th Governor of Tennessee (1987 to 1995).

Junior left Bay-Bee Shoe Company and went to work for the Weakley County Municipal Electric System (WCMES) and was eventually promoted to director of WCMES. After a career of almost 45 years at WCMES, he retired in 2000. “I enjoyed every minute of it,” Junior said. “I miss a lot of those people that worked there. A lot of them have retired or passed away.”

In addition to his job at WCMES, Junior also raised cattle on his farm, and he continues to do so to this day. “I enjoy every bit of it,” he said.

Winnie worked for the UT Agriculture Extension Service for 12 years. She then stayed at home for about four years. Next, Winnie worked as a classroom teacher at Dresden Elementary School. After approximately 10 years, she was promoted to school principal – a position she held and cherished for the next 20 years. After 30 years in the field of education, she retired in 1999.

When asked what some of their fondest memories were during their many years of married life, Junior stated vacationing together.

Winnie recalled some of the fun times they’ve had as a couple. She said, “We enjoy traveling, and we’ve been to a lot of interesting places.”

“The past few years, we’ve been to a lot of places throughout the United States,” Junior said. He mentioned visiting Los Angeles, Seattle, Boston, New York, Toronto and many other vacationing destinations.

Junior and Winnie agree their favorite vacation spot is Hawaii.

Junior says they catch a flight to their vacation destinations and avoid the hassle of driving long distances.

Winnie says she and Junior are still very active. “We take good care of ourselves and are in good health.”

Junior and Winnie have served the citizens of Weakley County in different ways over the years.

Junior is a former member of the Jaycees, which sponsored many local community activities, such as the Miss Dresden Pageant and Miss Weakley County Pageant. They were very supportive of the Weakley County School System, and raised money for various school events and projects. They also participated in the activities of other community organizations.

Junior is a former or current member of several boards serving the people of Dresden and Weakley County as follows:

The couple has been heavily involved in community activities and have both served on various Tennessee Iris Festival committees.

Junior and Winnie have both been named the Tennessee Iris Festival’s Citizen of the Year and Golden Irises.

Winnie’s main involvement in the Iris Festival includes hosting the Iris Tasting Party – an event she has chaired for the past 21 years. She also worked on compiling the first Iris Festival Cookbook.

Junior’s honors include being the first person named Weakley Countian of the Year (2002), by the Weakley County Chamber of Commerce.

Junior and Winnie Moore have been diligent in serving the citizens of their community. They have a great love for Weakley County and its people. The couple’s philosophy is that one should give of their time and effort to make the community a better place to live.