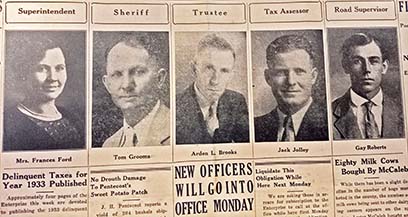 August 1936 was a turbulent time in Weakley County with polio cases on the rise, known as “infantile paralysis,” along with a grand jury murder trial.

The first week of August reported new cases of infantile paralysis and a local teen dying from it.

“Warning Given by the County Board Health” reported that a resolution was passed during a meeting with Health Authorities. All churches in Dresden announced they would have no Sunday services to comply with recommendations by health officials.

The Weakley County Board of Health met in August 1936 and released two resolutions to help prevent more cases being found in Weakley County. It was noted, “The warning should be religiously heeded in every community. To do so, may save human lives. To fail – may cause many fatalities.”

There were four cases reported in the county at the time of the meeting held in August. It was reported that Robert Norman, three-year-old near Dresden; Otis Sampson, a 21-year-old near McKenzie; and a child from the Perry family in the Sidonia community, who had the disease and recovered, were all reported to have had infantile paralysis.

Because of the rising cases, the two resolutions that were passed said this disease appeared to be spread by healthy people who had the disease, but did not show any symptoms and that this disease seemed to be spread in large crowds. It was recommended that all gatherings including, “schools, churches, picture shows, ball games or other places of amusements,” be discontinued for 10 days. It was also suggested that all children under the age of 12 should be kept at home as much as possible. Also, every head of the family go see their family physician for specific instructions on how to prevent infantile paralysis. It ended with a note that members of the Board of Health agreed that if all complied with these new guidelines, many lives could be saved.

Along with these new guidelines being put in place, it was reported that a teenager had died from infantile paralysis.

“John Booth, 15-year-old son of Germon Booth, residing several miles out from Gleason, died Friday of infantile paralysis, the first fatality in the county from this malady. Another case reported from the vicinity of Limbs, near the Obion county line, some 20 miles distant, was reported in these columns last week.

The Booth child, it is understood, had just returned from a visit to Missouri with his parents. Following his death city officials of Gleason issued warnings to call off all public gatherings and advised that children be kept off the streets. The revival was postponed and all precautions taken to prevent a spread. Because of the rise of infantile paralysis, it was recommended by the U. S. Public Health Department to use an Atomizers nasal spray, which had ingredients in it that could cause serious medical conditions and problems.”

It was also reported that a worker for Vowell Lumber Company was killed due to a runaway log. Workers were at the river in Hatler’s Camp Grounds, where a large log got out of control. This log knocked 20-year-old Robert Wallace into the water, where it rolled over him and he died. He left behind a wife and young child.

A huge news story for Weakley County was that Fred Taylor faced a murder charge, accused of killing 27-year old Irvine Klutts. It was reported that a large crowd gathered to see the selection of the jury for this trail.

It was reported that Fred Taylor claimed self-defense in the killing of Klutts. The killing took place near the home of the two involved who were neighbors. There were only two eyewitnesses to the killing, which were two young boys.

The judge for the case was Judge R. E. Maiden with Honoree J. W. Thomas assisting General Drane in the prosecution with Honoree Dwayne Maddox from Huntingdon as the defense’s counsel.

“We’ve pointed out repeatedly that Dresden isn’t standing still. A record, unbroken, perhaps, in the past three-quarters of a century, was smashed in Dresden as every house of worship were closed.

There was neither Sunday school nor preaching at any of the Dresden churches. No person now living here can remember when all the local churches were closed on the Lord’s Day – not even back in 1918, when the weather was bitter cold and deep snows covered the grounds for weeks and weeks.

The reason: The Weakley County Board of Health recommended that public gathering be called in, that people refrain from congregating, etc. in its program to prevent a spread of infantile paralysis. It was not an order, as some misunderstood, and the several pastors and Sunday school superintendents here announced no Sunday services.

While there was not a single case in Dresden, the nearest being several miles out from town, it was the purpose of the ministers to comply with the request.”

In the following week’s paper, it was reported that Fred Taylor was acquitted for the murder of Irvine Klutts.

It was reported that multiple eyewitnesses were called to the stand to tell what they saw and witnessed, along with many coming to the stand to tell how Klutts had a habit of threatening to shoot people in the past. With all the evidence presented, Taylor was acquitted of the charges of manslaughter.

An interesting headline graced the front page of the Enterprise in the August 28 issue, titled, “Girls, Charged with Profanity, Locked Up,” with the full story as follows:

“Willie May Williams and Dessie Fane, white girls about 20 years of age, were locked up Saturday, when arrested at Martin by Deputy Finis Summers. The girls were indicted at the August term circuit court upon the above charge and taken in tow at Martin by Summers armed with a state warrant. This is the first time in the history of the county, perhaps, that white girls have been landed behind the bars at the county jail.”

The first week of September included other headlines of including, “$150,000 Building Program Now Under Way in Dresden”

In this story it was reported that a gymnasium and other buildings were under construction. One building was a Dresden High School gym. The total cost was $10,000 and would be connected to the main school building. It was planned to have a seating capacity of 1,300, two locker rooms, showers, and a stage for performances. It was scheduled to be completed at the start of 1937.

The Dresden Post Office also began construction in the autumn of 1936. The total cost was $68,000 and Potter Moore had recently completed digging out the basement for the post office at the publication of the paper.

It was also reported that three new county officials would begin working soon for the county. In the story titled, “County Officials That Take Over Their Duties Monday,” it was reported that Mrs. Frances Ford was the Superintendent; Tom Grooms was the Sheriff; Arden L. Brooks was the Trustee; Jack Jolley was the Tax Assessor and Gay Roberts was the Road Supervisor.

Ford, Brooks, and Roberts were all new to their positions. It was speculated that Judge McWherter would conduct the oaths.

Other stories of interest in the September editions included:

“Two road house pad-locking cases will be heard here Saturday before Judge Elkins.
Gen. John Drane has filed applications for injunctions to pad-lock north of Martin and both petitions allege the illegal sale of intoxicants and gambling. One place is operated, the bill recites, by Hulon Maugray, located north of Martin one mile. Gen. Drane alleges that this road house is selling liquor and permitting gambling. The other place is operated, the bill states, by Prestly Parker and Winnie Bomar. It, too, according to the petition, is charged with selling intoxicants and allowing the operations of slot machines and gambling. Citizens in the immediate vicinities of these road houses are said to have complained for some time, and now the attorney general is asking that they be pad locked.”

“Power of the Pulpit Is Again Manifested”

“Citizens of Martin voted last Friday on the propositions of a Sunday picture show. The Sunday show was voted down almost two to one. The vote stood: For Sunday shows, 386. Against, 655.

A proposition was submitted the city council to license Sunday moving picture shows in Martin. Members of the council agreed to submit the issue to a vote of the people of Martin. None but qualified voters were allowed to participate, and 1,044 votes were polled.

Ministries of the gospel of Martin were solidly lined up against Sunday shows. They expressed their opposition from the pulpit, and the overwhelming defeat of the propositions is a manifestation of the power of the ministry.”

In this week’s, “Looking Through the Archives” there were multiple stories that involved “infantile paralysis,” otherwise known as polio, with many changes to everyday life in Weakley County. It might sound eerily familiar to readers of recent events in the area and world. It is important to know that each summer, for decades, many would call it “polio season,” due to the increase of cases. There were many different medications that were sold advertised to help prevent or even cure the disease, but a proven vaccine for polio was not created until 1955 by Dr. Jonas Salk. He created a vaccine with an inactive polio strain and later, a live, weakened, polio strain vaccine was developed by Dr. Albert Sabin and was first used in 1961. Both were shown to be very effective against the disease.