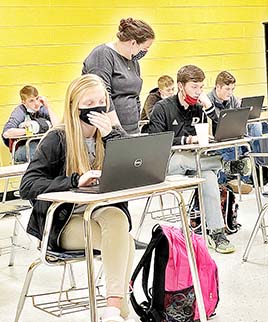 Cassie King teaches English to Dresden juniors and seniors and takes on an array of other responsibilities, all of which this year has netted her recognition as Weakley County Schools’ Teacher of the Year for grades 9-12.

DRESDEN (February 3) – Every teacher in a rural school knows that his or her contribution will not solely be in the classroom, standing before students, passing along knowledge. Cassie King, Weakley County’s Teacher of the Year for grades 9-12 seems to thrive on it.

In addition to her English III and English IV, plus Honors English classes at Dresden High School, in the year of COVID, she added overseeing the work of first 20 and now 10 Monitored Distance Education learners who were/are taking classes online during the pandemic. She became the school’s Google Classroom “guru,” helping fellow teachers prepare for the possibility of going virtual by sharing what she had already learned in her previous use of the online classroom tool. And she and librarian Alison Moctezuma sponsor the school’s Ethics Bowl regional winners.

She’s the first to acknowledge that her approach to helping juniors and seniors become the communicators they need to be in the future is not typical for English III and IV.

“Traditionally, when they are taught writing they get an outline and how-to’s,” she explained of the formula-based approach that emphasizes completing a certain number of sentences and paragraphs. Instead of focusing on the mechanics, she says she begins with, “You write and we’ll fix the problems. You do you.” Calling it a more hands-off approach, she says she wants to see the “students dive in and see what they are capable of doing.” Then she offers feedback.

“I do this because my main goal in teaching writing is to assist my students in finding their own voice,” she underscores.

Recognizing writing as a means to critical thinking comes naturally to the Humboldt native who studied political science and got a master’s in sociology. The fact she wound up in a high school classroom is due in part to a year she spent helping out as a Milan special education educational assistant. “Nourished,” she said by the teachers there, she began to explore new possibilities. Experience with elementary-level students demanded more “drilling” than she liked so she entered the high school classroom.

The move to high-school teaching allowed her to fully live out her philosophy that teaching is “50 percent content and 50 percent life skills.” One means of doing that has become the Ethics Bowl, an opportunity she jumped at when it was introduced as an option four years ago.

She explains that the goal of Ethics Bowl is similar to debate – teams are given cases covering hypothetical or current issues and prepare presentations based on discussion questions. The main difference is that during the Ethics Bowl the conversation is based on both sides working together to discuss the topic in detail and there is the possibility for both disagreement and agreement.

“Through Ethics Bowl, my students have been able to have conversations with other students from public and private schools with richly-nuanced experiences and backgrounds, and they have been able to provide a perspective that those students may not have been exposed to earlier,” she noted.

The Dresden team brought home their second regional win in a row as they claimed the title in a virtual competition last weekend. Taking on topics such as the impact of charitable donations, dining out during a pandemic, cancel culture, and contraceptive controversy means the students are engaged in research, writing and public speaking but they also gain a broader understanding of the world and increased curiosity.

What motivates King, she says, is a philosophy she has received from following former wrestler and actor Dwayne “The Rock” Johnson on social media. He promotes the idea of “be the hardest-working person in the room.” Added to her parents’ encouragement that a “job is not worth doing unless you do it well” and one can easily see the ingredients that have King adding a few more things to do.

She’s asked her honors students to take six weeks to think about school reform and what would realistically work at Dresden. She’s also working with the data team to survey students on what has contributed to an identified disengagement and higher-than-normal failure rate this year.

“Something magical happens between sophomore and junior year. They seem to say, ‘I’m ready to buckle down.’ But for this class [COVID year], that light bulb moment didn’t happen for many of them,” she observed.

She adds that it seems that some students appear to be in a place of “I don’t know what’s going on and I don’t know how to tell anyone” so they shut down.

Through writing assignments where students are told only to answer the prompt, discussions generated by Ethics Bowl cases, questions in class and on the survey, and relying on the relationships she builds as she proves again and again she is listening, King hopes to learn more about how to better engage the students.

“Selecting a Teacher of the Year is never easy because we have many outstanding teachers from which to choose,” explained Donald Ray High, the instructional supervisor for grades 6-12. “But this year, when COVID has taken so much, recognizing Cassie King, someone who is giving so much just makes sense. We are grateful for what she brings to the Dresden High School faculty and what she adds to the county as a whole.”