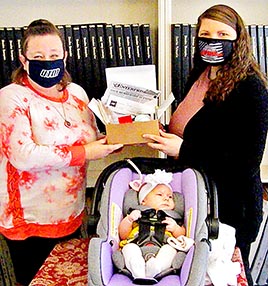 VOTERS’ CHOICE – The Dresden Enterprise held a social media contest recently on its Facebook page, which featured the photos of all babies who were spotlighted in the “Babies of 2020” special edition in the January 27 issue. After five days of voting, Macy Lee Plunk of Sharon, daughter of Chase and Terri Plunk, received the most votes at 285. Macy was born on December 2, 2020, and weighed seven pounds and four ounces and was 20 inches long. As a contest winner, mother Terri Plunk was presented with a prize basket, which included a one year subscription to the Enterprise and other goodies donated by Buff City Soap of Martin, ClaireBrooke Consignment of Dresden, and Skyhawk Nutrition of Martin. Pictured is (L to R) Enterprise Editor Sabrina Bates, baby Macy and Terri Plunk.