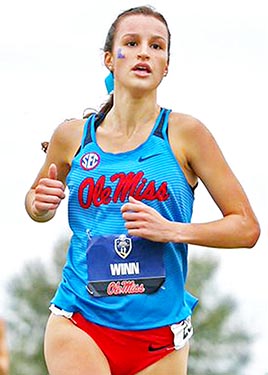 FAYETTEVILLE, ARKANSAS (January 30) – Ole Miss seems to be putting the Winn in winning.

Winn, who won state championships in both cross country and track-and-field for Dresden, set an Ole Miss women’s record for the mile in Fayetteville, Arkansas with a time of 4:45.60. She broke her teammate’s mile record, set a few weeks earlier at the Vanderbilt indoor track meet.

“When I run, I know that it’s what I am meant to do. My passion for the sport and the ability to compete motivate me to be better each and every day. I hope that whether I am racing on a big stage or doing something as simple as going to practice to train, God is being glorified through it all. I wouldn’t have the privilege to run without all of the blessings He has given me,” Winn noted.

The Rebel women’s track team is rated No. 18 in the current national rankings after their sixth-place finish at Arkansas.

She signed with Ole Miss her senior year at Dresden High School. She is the daughter of Peanut and Shelley Winn of Dresden, both active in Dresden athletics during their day. Shelley was a cheerleader for Dresden. Peanut helped lead the Lions to a 1987 state baseball title, quarterbacked the Lions to the state quarterfinals in 1986 and was an all-state basketball player for Dresden.

Winn is majoring in journalism at Ole Miss, with hopes of becoming a sports broadcaster.