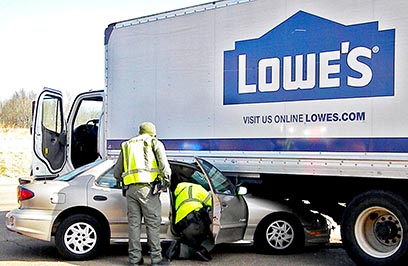 The driver of the 2002 Pontiac, a 76-year-old Dresden resident, escaped serious injury after her vehicle collided with a Lowe’s delivery truck on Highway 22 between Dresden and Martin Tuesday, February 2.

DRESDEN (February 2) – Motorists traveling along Highway 22 between Dresden and Martin last week were witness to the aftermath of a two-vehicle collision involving a Lowe’s delivery truck and passenger car on the highway. Despite the dire look of the accident, all involved were able to walk away from the accident, with one sustaining minor injuries.

A 2002 Pontiac driven by a 76 year-old female Dresden resident was traveling on Highway 22 towards Dresden from Martin. A Lowe’s box truck was at the stop sign intersection at Adams Road and State Route 22. The truck, which was delivering items for Lowe’s, entered the highway where the Pontiac hit the truck. The accident took place around 10:30 a.m. Tuesday, February 2.

A portion of the front of the Pontiac was crushed underneath the delivery truck. That is when a passenger of the Lowe’s truck, Byron Abbott of Union City, jumped into action.

Just before the accident, Abbott said he and the driver were making deliveries for Lowe’s and was almost finished for the day, ready to clock out. He was on his phone but when he heard and felt the crash, immediately jumped out of the truck to help the driver of the Pontiac. He first made sure that the driver was safe and when he found that she was, he helped her out of the vehicle.

Abbott noted, “God is good. We were very lucky, she could of hit the gas line and it would have been over for all us.”

The only injury that Abbott noted the woman sustained was a cut on her hand. The driver of the Pontiac only had only minor injuries and was transported for a routine check-up by emergency responders.

There were no major injuries reported by any involved in the accident and all involved were wearing their seatbelts.