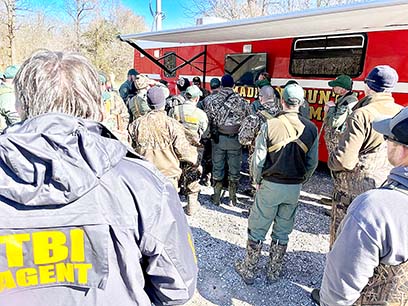 DRESDEN (JANUARY 30) – Investigators with the Tennessee Bureau of Investigation discovered the body of a suspect sought in last week’s apparent double homicide at Reelfoot Lake Saturday afternoon. District Attorney General for the 27th Judicial District Tommy Thomas confirmed Saturday evening the body was positively identified as David Vowell, 70, of Martin. Law enforcement agencies searched for Vowell last week after he became the person of interest in the shooting deaths of two young Greenfield men on the water in a duck hunting blind.

Thomas said Vowell’s body will be sent for an autopsy and a cause of death was unknown at press time. Vowell’s body was found in the lake near the incident around 3 p.m. Saturday.

The circumstances surrounding the apparent double homicide of Zackary Grooms, 25, and Chance Black, 26, both of Greenfield, at Reelfoot Lake in Obion County Monday, January 25, 2021, were described as out of the ordinary by 27th Judicial District Attorney General Tommy Thomas.

“Nothing is ordinary about this case … But I am going to try my best to get all of the truth out there as we know it,” Thomas said Thursday morning, adding ethically they don’t intend to have the case tried in the press. Ultimately, Thomas wanted to squash rumors and “garbage” circulating about the incident and those involved in the case.

Wednesday afternoon, Thomas met with about 20 members of various law enforcement agencies as they provided updates, witness accounts and further physical evidence found at the scene as investigators piece together what happened on the water that morning that led to the untimely deaths of Black and Grooms.

The victims were shot in a duck blind on Reelfoot Lake near the Walnut Log area Monday around 11 a.m. Thomas requested Tennessee Bureau of Investigation Special Agents to take the lead in the investigation. By around 10 p.m. that day, the TBI issued a statewide alert seeking the whereabouts of a Vowell, who was considered a person of interest in the case.

Grooms, Black and their friend, Jeff Crabtree, were in the duck blind that Monday morning when they were approached by Vowell asking if he could hunt with them. While in the blind with the three men, Vowell reportedly shot Grooms in the chest. While Black was attempting to help his friend, Vowell stuck the gun in Black’s side and shot him. Crabtree, who is now the main witness in the investigation, intervened, got his friends into a boat and struck Vowell in the head with a gun. Eventually, Crabtree pushed Vowell into the waist-deep water.

Thomas said while no motive has yet to be determined, it appears Vowell was suffering from dementia. The DA said it’s his understanding that Vowell duck hunts daily during the season.

As for the speculation that Crabtree was a suspect, Thomas said there is no scenario implicating him in the shooting incident. The DA said Crabtree was friends with the victims. His actions trying to get them help and the little time he had to get them out of the water led him to be convinced Vowell was the suspect.

Law enforcement agencies combed the wilderness surrounding Reelfoot Lake for Vowell last week. High waters and heavy rainfall hindered search efforts earlier in the week. Thomas said investigators found nothing linking Vowell to receive any help in leaving the area. Vowell’s vehicle was towed from the scene Monday and his boat was located about 200 yards away from the blind Tuesday.

Thomas said he planned to issue a press release into the incident last week to quell any more conspiracies, rumors or further speculation about the incident. With the discovery of Vowell’s body, more information will be released after preliminary results of the autopsy become available.

Autopsies of the victims’ bodies concluded Wednesday in Nashville. Funeral arrangements for Black were held Sunday at Pilgrim’s Rest Cemetery in Christmasville. A service was held Monday at Hornbeak Cemetery for Grooms.

Vowell was a retired Martin business owner and member of the UT Martin Rodeo Hall of Fame. He was also a member of the Tennessee National Guard.