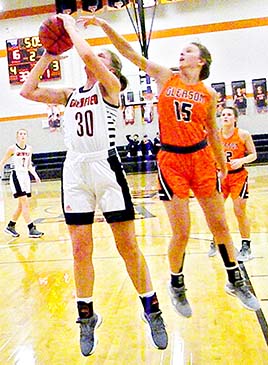 GREENFIELD (January 29) – The Gleason Bulldogs traveled to Greenfield for another district game and had hopes of repeating their win from earlier in the season. At the beginning of January, Greenfield and Gleason faced off in a district match at Gleason where the Bulldogs won both games over the Jackets. This time Greenfield hosted and had a strong push to prevent the Bulldogs from taking another win, which turned out to be successful.

Before the game began, a special presentation was made to Greenfield representative Jeff Floyd, in recognition of School Board Appreciation Week last week.

The Lady Jackets began the night with a strong push in the first quarter making 14 points to Gleason’s two. Edie Darby made the sole three pointer of the quarter for Greenfield, which brought her to five points.

The Bulldogs struggled in the first quarter with the Lady Jackets swarming the Lady Bulldogs with Hallee Young shooting the only two points for Gleason.

Gleason responded in the second quarter catching up. The Lady Bulldogs had Alayna Anderson and Young both score three points that helped bring Gleason up by 12 points after a slow start. Greenfield’s defense might have struggled to hold back Gleason, but the offense was still able to work. Reese Biggs and Caroline Biggs both shot for three and led Greenfield with nine points before the halftime. This kept Greenfield’s lead going into the halftime at 23-14.

After the half, Greenfield’s defense worked to prevent Gleason from making more points. The Lady Bulldogs struggled, only scoring seven points with Chasney Brawner making a three-pointer. The Lady Jackets shot for multiple two-point shots with Paige Glisson scoring four. In the beginning of the fourth quarter, Greenfield had the lead at 35-21.

A strong and final push by Gleason picked up 19 points. Sophie Wilson and Chasney Brawner both shot a pair of three-pointers, with Alayna Anderson shooting for seven.

It is possible that Greenfield might have lost this game against Gleason if it were not for multiple fouls made by the Bulldogs. Greenfield put up eight points through multiple free throws due to fouls, which gave Greenfield the boost needed to take the game. Greenfield walked away from this district game with the Lady Jackets winning 47-40 over Gleason.

Edie Darby led Greenfield with the most points at 13, with Caroline Crouse at 12 and Paige Glisson at 11. Leading for Gleason was Alayna Anderson with 13 points and teammate Chasney Brawner shot for nine points. Hallee Young earned eight.

The Greenfield boys hoped to continue the Lady Jackets’ lead in the second game of the night. The Jackets set the pace for the rest of the game early, scoring 17 points in the first quarter alone. Jacob Floyd shot a three pointer, along with scoring six other points, giving Greenfield the lead. Gleason struggled with the Jackets’ defense, only making eight points by Olen Reed and Elijah Young.

Gleason did break through the strong Greenfield defense in the second quarter to score 12 points. Garrett Pinkston and Olen Reed met the net for three points each with Elijah Young scoring four. It was not enough for the Bulldogs to take the lead before the half with Greenfield ahead at 31-20.

Both teams came back in the third with a strong push. Gleason’s Elijah Young shot for 10 points alone in the third, leading the Bulldogs in their 14-point total for the quarter.

Jacob Floyd of Greenfield responded with nine points of his own, one a three-point shot. The Bulldogs had a strong push, but was unable to stop Greenfield from scoring. This had Greenfield increase their lead to 46 points against Gleason’s 34.

The Bulldogs made one more attempt to come back from behind in the fourth quarter. Elijah Young and Olen Reed both shot for five points and Garrett Pinkston for four. But the Bulldogs missed eight shots from the free-throw line, which hurt them in the end.

Greenfield, however, continued in the fourth with Matt Scates shooting a three pointer and the team making six points from the free-throw line. Although Greenfield only scored 11 points in the fourth quarter to Gleason’s 14, it was not enough for the Bulldogs to overtake Greenfield.

Jacob Floyd led with 26 points for the Jackets with Matt Scates making 11 points and Kire Tribble for 10. On Gleason’s side, Elijah Young made 24 points with Olen Reed at 14 and teammate Garrett Pinkston with nine.