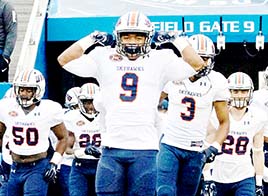 MARTIN (January 23) – Exactly 14 months since it last took the field in an official capacity, the University of Tennessee at Martin football team began its 2020-21 season preparations with its first practice at Hardy Graham Stadium.

Jason Simpson enters his 15th season at the helm of the Skyhawk football program as the longest tenured head coach in the Ohio Valley Conference presides over a roster that returns 14 starters. UT Martin is coming off a 7-5 record in 2019 – finishing one game out of first place in the OVC standings with a 6-2 mark in league play.

After leading the OVC in scoring defense (19.5 points allowed per game) in 2019, the Skyhawks bring back six starters on that side of the ball. That includes senior safety JaQuez Akins (92 tackles, 5.5 tackles for loss, six pass breakups) and redshirt senior defensive lineman Austin Pickett (38 tackles, 7.0 tackles for loss, 4.5 sacks) – each of whom garnered Preseason All-OVC mentions.

A limited number of season tickets and Champions Club memberships are on sale now. Call the Skyhawk Ticket Office at (731) 881-7207 for more information.