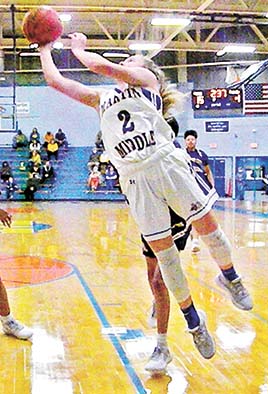 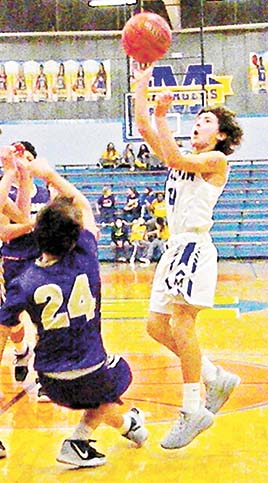 MARTIN (January 21) – The Martin Middle School Chargers completed their final home game of the 2020-2021 season Thursday, January 21, against Union City as eighth-graders were honored for their hard work throughout the years.

Union City failed to miss the net, only scoring four points in the second quarter. Martin continued to shoot for 13 points, led by McCall Sims with five points. Hayden Swaim and Marianne Moore both shot three points. At the halftime, the Lady Chargers led by a score of 20-8.

At the start of the third quarter the Lady Chargers gained an additional seven points with three from the free-throw line. Hayden Swaim shot for five points.

In the fourth quarter, the Lady Chargers had a lead of 32-14 and younger players started to rotate into the game. Martin did not score in the fourth quarter, while Union City picked up five. Martin’s Josey Clark did shoot for an additional point, but it did not connect. This completed the game with a final score of 32-19.

Leading for both teams in points was Hayden Swaim, at 14 points, and McCall Sims made eleven points.

In the boy’s game, the Chargers began with four points, all made by Cooper Spaulding. Union City shot for nine points in the first quarter.

In the second quarter, Union City scored 21 points, while the Chargers had difficulties with rebounds to recover the ball for points. The Chargers were able to score 10 points with Tyler Belew making four points. At the halftime, Martin was falling behind at 41-26.

The Chargers, in the second half, had a big push back against Union City on the offensive side. They made 12 points in the third quarter with Miami Woodridge scoring six points and Cooper Spaulding picking up four. Union City continued to break through Martin’s defense to score.

Martin finished the game picking up 15 points, with Donteze Joy shooting for eight points and five points being made by Nolan Pritchett. Union City won with a final score of 51-41.

Martin’s Miami Woolridge, Cooper Spaulding, and Donteze Joy all shot for 10 points each and Nolan Pritchett made seven points.

At halftime during each of the games, eighth-grade players were honored for their dedication to the Martin Middle School basketball program. During halftime of the girl’s game, the eighth-grade boys were honored with each player and their guardians receiving a flower. Those named were: Tyler Belew, son of Bart and Amy Belew; Anderson Cary, son of Alan and Kim Cary; Brayden Davis, son of Anna and Patrick O’Connor and Patrick and Laura Davis; Tucker Melton, son of Jason and Paige Melton; Nolan Pritchett, son of Chris and Elizabeth Pritchett; Cooper Spaulding, son of Michael and Holly Spaulding; and Miami Woolridge, son of Oki and Rachell Woolridge.

The girl’s team in the past three years has a record of 60 wins and five losses. These players will look to continue their sports’ careers in high school as freshmen.