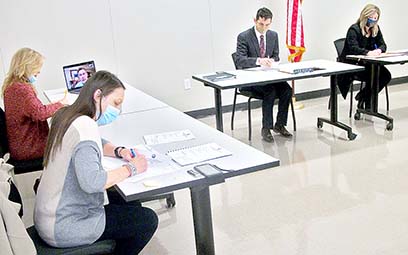 Weakley County Mayor Jake Bynum informed members of the County Commission about the number of local citizens affected by COVID-19 and vaccination procedures, when they met in the Seminar Room of the Personal Development Center in Dresden last week.

DRESDEN (January 19) — Members of the Weakley County Commission received an update concerning the impact of COVID-19 on the health of local citizens, during an in-person meeting held Tuesday, January 19, in the Seminar Room of the Personal Development Center in Dresden.

County Mayor Jake Bynum reported 3,412 Weakley Countians currently have or previously had COVID-19, which amounts to one out of every nine citizens. He stated the current (as of Tuesday, January 19) active number of individuals infected with the coronavirus is 178, which is one out of every 187 citizens. There have been 48 reported deaths and 49 are currently hospitalized, as of Tuesday, January 19.

“That number is down substantially from the first of the year, although we’ve had an increase of 341 active cases since the first of January,” Mayor Bynum said.

“The Supreme Court has issued another extension banning in-person court proceedings until March 31, except for emergency situations. That will create a lot of issues for us, once we’re allowed to have court again. Not just in regular court proceedings, but when a jury is seated. There will be a lot of scheduling we’ll have to work through.”

Regarding COVID-19 vaccines, Mayor Bynum said, “The pipeline is getting better. Those who have received the first shot of the vaccine will start to receive the second shot this week.” He stated the procedure for receiving shots involves getting on a waiting list to schedule an appointment for the vaccination.

During recent committee meetings, Mayor Bynum praised the staff at the Weakley County Health Department for the job they’re doing vaccinating as many people as they can with the limited number of shots available. He stated it works much better to vaccinate citizens at the Dresden Senior Center, due to parking limitations and traffic flow issues at the health department. Also, Dresden Senior Citizens Center has an awning to shield medical staff and citizens from the rain when they’re receiving their vaccinations inside their vehicles.

According to Mayor Bynum, the Weakley County Health Department is fielding hundreds of calls; the waiting list is lengthy; supplies are limited; and staff is vaccinating individuals as quickly and efficiently as possible.

“The public’s patience is very much appreciated,” Bynum said. “If callers cannot get through to the Health Department by telephone, please hang up and try again in a few minutes at 731-364-2258.

“The Weakley County Health Department staff has been working courageously and tirelessly since the beginning of the pandemic to help us all during these unsettling times,” Mayor Bynum said.

The state’s timeline for vaccinations is on the following webpage: https://covid19.tn.gov/covid-19-vaccines/vaccine-phases/.