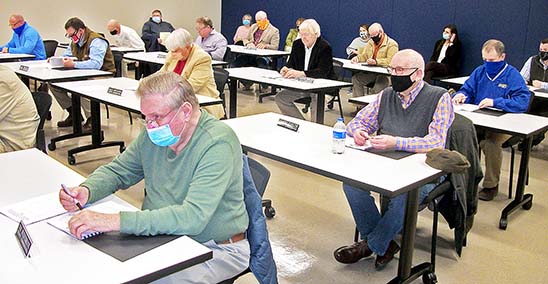 Weakley County Commissioners dealt with a broad agenda when they met in the Seminar Room of the Personal Development Center in Dresden the evening of Tuesday, January 19.

DRESDEN (January 19) — Members of the Weakley County Commission received an update concerning several important matters during an in-person meeting on Tuesday, January 19, in the Seminar Room of the Personal Development Center in Dresden. Issues discussed included: the impact of COVID-19 on the health of local citizens; the status of the fiber internet cable in rural parts of the county; imposing zoning regulations on poultry barns, due to the stench they generate; the financial status of Weakley County regarding locally low unemployment numbers; tax-rate revenues; committee appointments and resolutions budgeting CARES Act funding.

County Mayor Jake Bynum stated 3,412 Weakley County citizens currently have or previously had COVID-19, which amounts to one out of every nine citizens. He stated the current active number of individuals infected with the coronavirus is 178, which is one out of every 187 citizens, as of Tuesday, January 19. See related article in today’s edition.

Another major topic for discussion involved the status of a fiber internet cable project, which will bring high-speed internet service to all of the unincorporated areas of Weakley County, once it is completed. The fiber internet infrastructure network will cost Weakley County $10.5 million for its part of the project. West Kentucky and Tennessee Telecommunications Cooperative, Inc. (WK&T), which is the service provider installing the cable, is obligated to pay a matching amount and is pursuing grant funding to help make up the difference. The total cost of the project is estimated at $26 million.

Commissioner Gary Eddings reported, “WK&T has completed 60 percent of the fiber cable installation in the northern portion of Martin. They hope to get the people in that area online around March or April. Within the next month, they’re going to start trenching and boring the fiber lines in the Sidonia area.

Regarding citizens’ complaints about the horrible smell emitted by poultry farms in rural Weakley County, Commissioner Eddings stated he and Commissioner James Roy Pope looked into the matter.

Weakley County Attorney Allison Whitledge said, “I did considerable research into it, and discovered Tennessee has some very strict farm laws in place. Statutory authority leaves very little opportunity for any type of county zoning requirements restricting agricultural purposes. I do not see where our county would have an opportunity to pursue any type of zoning requirement or regulation that would affect agricultural purposes.”

“There is considerable case law and Attorney General opinions regarding the subject,” Whitledge said. “I spoke extensively with our representative from the County Technical Assistance Service (CTAS) and he concurred with my opinion. Based on the laws that are out there right now, I think it’s prohibitive for the county to entertain any type of ordinance concerning zoning that would affect agricultural purposes. And, poultry operations clearly fall within the statutory scheme of agricultural purposes,” she added.

Mayor Bynum reported on the status of unemployment and tax collections in the county.

Commissioner Dennis Doster asked, “What about the status of online sales taxes.”

Mayor Bynum replied, “We didn’t start fully collecting the online sales tax until October, also the amount we can collect decreased. It will be interesting to see what the county’s numbers will look like year-over-year. More citizens are at home (due to COVID-19), and we saw far more online shopping and local shopping during the holiday season, and that has been a great benefit for us.”

In appointments, the Commission approved the reappointment of Whitledge as Weakley County Attorney, as recommended by the Financial Management Committee.

The Commission also appointed Commissioner Larry Hudson of Gleason and Rhonda McDaniels from Dresden to serve on the Ag Extension Committee.

The Commission voted to adopt the 2021 County Maintenance Road List. According to Highway Department Supervisor Charles Ross, there were no road additions to the map this year. However, he mentioned corrections were made to the list in instances where roads were identified by two names.

The Commission passed a resolution budgeting grant funding totaling $18,828 for the Weakley County Sheriff’s Department. The funds are earmarked to help cover the cost of transporting persons with mental health emergencies. According to Sheriff Mike Wilson, Tennessee state law allows sheriffs to appoint a secondary unit to handle mental health transportation. He stated Weakley County has entered into an agreement with Amerimed Services. The cost for the patient transportation company to provide the service will be paid out of the $18,828 grant.

A resolution budgeting CARES Act grant funding in the amount of $8,100 for the Weakley County Office on Aging in Dresden received unanimous approval. The grant allocates $7,100 for food supplies, and $1,000 for other supplies and materials.

Another grant, providing $2,900 in Cares Act funds for the Sharon Senior Center, was approved. These funds are intended to help offset additional expenditures incurred due to the effects of the COVID-19 pandemic. A breakdown of expenditures shows $2,400 is allocated for food and $500 for other materials and supplies.

In announcements, Mayor Bynum stated the next County Commission meeting is at 5:30 p.m. on Monday, March 15, 2021 or Tuesday, March 15. He noted the location of the meeting is undetermined at this time.