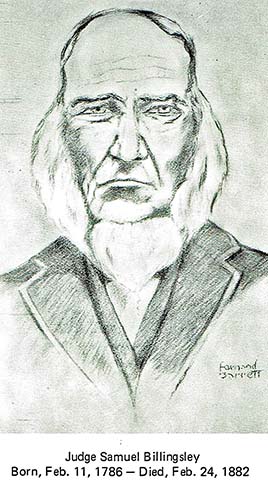 Andrew Jackson was president when Billingsley cousins, Samuel and John, began purchasing and selling land around Roan and Bacon creeks in Carroll County, near the present-day town of Clarksburg at I-40. Land speculator Samuel (his father John had received land grants for services during Revolutionary War) also purchased 100 acres south of the North Fork of the Obion River in Weakley County in 1840, but his eyes were set on Texas where letters had glorified the land as growing corn ten feet tall.

The Alamo had fallen in 1836, but Sam Houston (once governor of Tennessee) and his army immediately defeated Santa Anna at San Jacinto, and Texas became a republic for 10 years. (Another Tennessean, Davy Crocket, defeated in his fifth congressional seat by his enemy Andrew Jackson’s political machine) told his West Tennessee constituents, “they could go to h***; he was going to Texas.” Hoping to gain free land, he died in defense of the Alamo in 1836.

In 1840, Samuel loaded three wagons with all his worldly goods and with his second wife and seven young children by two wives, (he and Elizabeth would have three more) travelled across the Ohio and Mississippi Rivers by ferry and stopped over to rest in Izard County, Arkansas (Franklin). He was so impressed with the land that he made it his home for the next 40 years, becoming a judge and justice of peace. He died in 1881 at the age of 93, with 88 grandchildren.

Most of his adult children by his first wife followed him to Arkansas, and Samuel passed the Weakley County land to his cousin John, who was his Power of Attorney, and also a member of the Carroll County Court. John’s son, Edward Madison, good friend of one of Samuel’s sons, died around 1845, and John died in 1849; both men were buried in Carroll County.  Mary Warren and her six children – Warren, Madison, Gilbert Lafayette, Sarah, Louise, Joseph, (who died young) – ranging in age from eight to 21, left Carroll County and settled on the “Old Hill” in Weakley County, located north of Dresden, between Hyndsver and Latham, in 1849. The family is listed in the 1850 Weakley County Census.

Editor’s note: This is the first part of an on-going historical series written by Joyce Billingsby of the Latham community. The series will print every other week coinciding with the “Through the Archives” series. 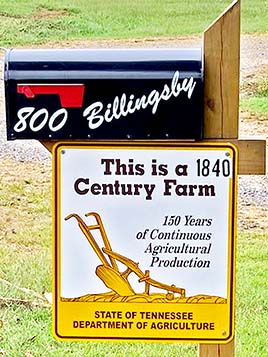