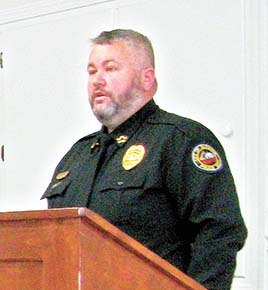 Gleason Police Chief Paul Eddlemon explained the terms of a lease-purchase agreement of a building to house the Gleason Police Department, during Thursday night’s board meeting. He also discussed the purchase of a new police vehicle to replace an existing vehicle that has numerous mechanical problems.

GLEASON (January 14) — A couple of items on the agenda during a special-called meeting of the Gleason Board of Mayor and Aldermen on Thursday, January 14, involved entering into a lease-purchase agreement for a building to house the Gleason Police Department and the potential purchase of a new police vehicle.

For years, the Gleason Police Department has operated out of a small room inside City Hall, which some officers have described as a broom closet.

“For many months, we have been in discussions about a police department – a place where we can conduct our business and interview suspects and victims,” Chief Eddlemon said. It would also provide extra office space.

Chief Eddlemon said he needs privacy to do his job, which involves the administrative duties of his department.

The chief stated, before Charles Anderson was elected mayor and was still chairman of the Gleason Downtown Revitalization Committee, he spoke with him concerning leasing the building directly across from the Bank of Gleason, which is a former insurance office.

Chief Eddlemon stated the property owners gave him a price of $27,500, but the previous Gleason Board of Mayor and Aldermen didn’t want to move forward with the project, before the election was over.

Since the original offer was made by the couple that owns the building, the husband died, and his widow is offering to sell the property at a reduced rate.

“Mayor Anderson went back to the owner of the building and discussed the offer,” Chief Eddlemon said. “The contract was typed up and reviewed by City Attorney Beau Pemberton, who stated everything is in order.”

The cost to purchase the building is $20,000. However, the city has been offered the option of entering into a lease to purchase agreement for property at $350 per month, which totals $4,200 annually. Every month a lease payment is made, it is taken off of the purchase price with no interest charged. In 57 months, the building will be paid off and become the property of the City of Gleason.

Chief Eddlemon estimated the renovation costs would be $3,000 or less. This includes constructing partition walls, an evidence room and purchasing a couple of doors. He also wishes to install signage over the door and on the window, identifying the building as the Gleason Police Department. This amounts to a one-time cost of $3,400.

The current owner agreed to purchase ceiling tile, because some are missing; ensure the heating and air conditioning systems are operational; and pay taxes and insurance on the property while under the lease agreement.

“We save money by sharing the internet with Gleason Fire Department,” Chief Eddlemon.

He stated, the total annual cost for the lease and utilities amounts to $6,900. “We can adjust our budget to fit the $6,900 per year, which would provide a place for us to work and operate.”

“It’s a prime location for a police department,” Mayor Anderson said. “It’s across the street from the bank, close to Gleason School, and right down the street from the drug store.” He noted this would meet the city’s needs in the foreseeable future. However, Mayor Anderson said, “My long-term goal is to build a brand-new police department on a piece of land near the center of town. Then, we’ll have the building across from the bank vacant to attract a business and generate property taxes, or sell it for a profit.”

The mayor stated the roof and plumbing are in good shape and the heating and cooling system is less than five years old.

“I think it would be a good addition to our town,” Mayor Anderson said.

Pemberton stated, if the board approves the contract, the 12-month lease agreement goes into effect February 1, 2021.

Chief Eddlemon says he would utilize his construction skills to renovate the building, and believes he could have the department in the building by March 1.

The board voted unanimously to approve the lease-purchase agreement for the property to be utilized as Gleason’s new police department.

Chief Eddlemon stated his department is already over budget for vehicle maintenance. “Just this past week, I spent well over $1,000 to get police vehicles to where they can continue to operate,” Chief Eddlemon said. “They’re aging quickly.”

“The last two we bought were Dodges,” Chief Eddlemon said. “They’re both under 20,000 miles and both of them have already been in the shop.”

He stated a new Dodge Durango costs $2,000 less than a Ford Explorer. Chief Eddlemon said, “$2,000 seems like a lot of money. But it’s a small portion compared to what we’ve spent on repairs and maintenance this year. So, we decided to purchase a Ford Explorer, which costs $33,397, plus the equipment we put in the vehicle costs $7,100, for a total of $40,397.” He noted there was already $80,000 in his budget approved for capital vehicles, which covers the purchase price.

Chief Eddlemon stated police departments sometimes buy used vehicles from the Missouri Highway Patrol, which they routinely sell after they get approximately 50,000 miles on them. He recalled, while working at McKenzie Police Department, his previous employer, the department purchased a used Dodge Charger, but after only eight months of service, the motor had to be replaced.

“The City of Gleason purchased two of these used vehicles, including a Dodge Charger, which we still have,” Chief Eddlemon said. “Both of them had to have engines. Once a vehicle is down, we have to swap cars out, so it is constantly running.”

Chief Eddlemon stated he researched the issue, and everybody he spoke with said, “You’re going to get longer service out of newer vehicles.”  This includes Gleason Vice Mayor Danny Browning, who is pleased with the service he’s had with the Ford Explorer he drives for the Weakley County Sheriff’s Department.

He explained this is cheaper in the long run. It will allow Gleason Police Department to have good patrol vehicles to serve the citizens of Gleason, while keeping maintenance costs down.

“That’s our reason for purchasing a new vehicle,” Chief Eddlemon said. He added, since the money is already in his budget, the vehicle purchase doesn’t require the board’s approval, but he wishes to inform them about the expenditure. However, regulations required him to wait until the new board was sworn in before making the purchase.

When a board member asked if SUVs are more expensive than cars, Chief Eddlemon said, “SUVs are more durable. Also, we have to carry more and more stuff in our cars.” He remarked the trunks in the cars are full, while the SUVs have much more room to store accident cones, scene-lighting equipment, and other items for use at accidents. Additionally, when police vehicles need to go off-road in pursuit of a suspect, the cars are too low to the ground, while the SUVs work fine. As an example, Chief Eddlemon recalled a shooting that took place on Carlton Terrace one night and the suspect attempted to elude capture by driving into a field. However, because Chief Eddlemon was driving a SUV, he was able to continue the pursuit and arrest the suspect. Chief Eddlemon said SUVs and trucks are good choices for police vehicles, especially in rural areas. He stated a Ford Responder pickup, built for police departments, costs about the same as SUVs. Chief Eddlemon stated, although Ford manufactured police model Crown Victoria cars for decades, regrettably, they stopped making them.