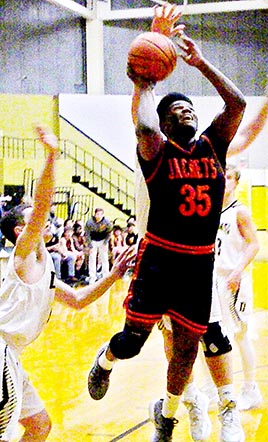 DRESDEN (January 8) – The Dresden High School Lions hosted the Greenfield Yellowjackets for a district game Friday, January 8, where the Jackets claimed a pair of wins over Dresden.

The Lady Jackets were able to set the tone for the evening with a strong defense, preventing Dresden from making many points and scoring 11 points in the first quarter. Greenfield’s Reese Biggs scored five points in the first quarter and Dresden’s Paisley Pittman made four points. The Lady Lions struggled to meet the net for much of the game. This was particularly evident in the second quarter.

Dresden made only two points in the second quarter from free throws by Paisley Pittman and Bella Bone. While Dresden’s offense struggled to make points, Greenfield broke through the Lady Lions’ defense for 17 points. Edie Darby made seven points. When the halftime came, the Lady Jackets led 28-10.

When the Lady Lions came back, they pushed to make more points, earning 12 in the third quarter. Belle Bone shot a duo of three-pointers. This was a strong push by the Lions’ offense, but the defense was unable to stop the Jackets. Greenfield made 13 points.

Scoring the most points for Dresden was Bella Bone with 12 and Paisley Pittman made seven. Greenfield’s Reese Biggs led the game with the most points scored at 23 and Caroline Crouse scored 11 points.

The second game of the night was similar to the girls’ game.

Greenfield scored 15 points in the first quarter. The Lions’ offense was able to break through the Jackets’ defense to score eight points. Zach Crawford and Steven Hobock made up the eight points for Dresden.

Dresden was not able to break through the Jackets’ defense and was only able to pick up four points. Greenfield though made 14 points with Jacob Floyd earning seven.

Dresden scored four points in the second quarter. At halftime, the Jackets led 29-12.

After the halftime, the Lions did break through the Jackets’ defense to score 14 points. Raymond Johnson made eight points. Even though the Lions started to pick up more points in the second half, Greenfield did not slow down in scoring. Barkley Biggs for Greenfield made 11 points alone in the third quarter.

In the fourth, Dresden made 16 points in the fourth quarter, the highest for the team during the game. The Lions made six points from free throws. The Jackets scored 12 points and was able to continue their lead throughout the game. The game concluded with Greenfield winning by a score of 60-42.

Scoring the most points for Dresden was Raymond Johnson, with 12 points and Steven Hobock with nine. Barkley Biggs for Greenfield scored 14 and teammate Kire Tribble made 13 points.

If basketball games are not cancelled or rescheduled, Dresden will travel to Bradford Tuesday, January 19 and will host South Fulton Friday, January 22.