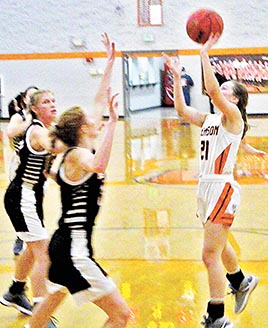 GLEASON (January 5) – The Gleason Bulldogs hosted the Greenfield Yellowjackets for an in-county district game where the Bulldogs came out victorious in both games.

Starting with the girls’ game, Gleason got the ball tipoff, but Greenfield was able to get on the board first with Anastyn Viyicie making a two-point shot. The Lady Jackets led for much of the first quarter. Caroline Crouse with Greenfield made seven points alone, while Edie Darby made six points.

Gleason was able to make a comeback in the first quarter as both Tinsley Parkins and Ava Sawyers connected for three-point shots. Chasney Brawner scored five points. This helped Gleason catch up to Greenfield and their hard work paid off as the second quarter began with the teams tied at 15-15.

In the second half, both teams struggled to keep the lead as they were met with strong defenses. The Lady Jackets were able to score 10 points. Gleason was down by two points with a second left in the third quarter when Gleason’s Alayna Anderson picked up the ball for two points at the buzzer to give tie up the score at 36-36.

The fourth quarter the Greenfield Lady Jackets had 12 team fouls called which resulted in Gleason making nine of eleven free-throws. The Lady Bulldogs were able to score 16 points in the fourth quarter, by Alayna Anderson alone. These points were able to give Gleason the lead to win the game with a final score of 52-42.

Scoring the most points for Gleason was Alayna Anderson, with 28 and teammate Chasney Brawner scored eight points. For Greenfield, Edie Darby made 19 points in the game, while Caroline Crouse scored 17 points.

The boys’ game started with Gleason receiving the tip off and Olen Reed for Gleason making a three-point shot. The Jacket’s offense found it difficult to find the net in the first quarter, only making four points by Kire Tribble and Matt Scates. The Bulldogs scored 11 points in the first quarter.

Gleason scored 10 points and was able to keep the lead due to the team’s set up in the first quarter. At the halftime Gleason led 21-16.

In the third quarter, the Bulldogs’ offense broke through the Jackets’ defense to score 15 points, with eight being by Elijah Young. The Yellowjackets made six points in the third quarter and were still behind going into the final quarter of the game.

These points helped the Bulldogs increase their lead and win the game against Greenfield, 58-41.

Garrett Pinkston made the most points for Gleason with 21 and Elijah Young made 16 for the Bulldogs. Scoring the most for Greenfield was Kire Tribble with 17 points and teammate Jacob Floyd scored nine points.