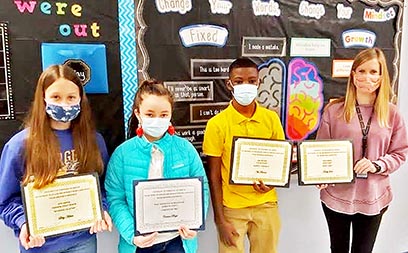 Martin Middle School had several students excel in the UTM Young Writers Contest. Libby Adkins won in the Personal Essay category. Corrina Boyd received a certificate of recognition in the Dramatic Script category. For the Flash Fiction category, Asa Barnes was the winner. Emily Scott (not pictured) won in the Short Story contest. Her award is displayed by Becky Mullins, the sponsoring teacher.

WEAKLEY COUNTY (December 17) – When the pandemic shut down the possibility of a University of Tennessee at Martin Young Writers Conference, organizers offered area students the chance to compete in a first-ever Young Writers Contest instead. Weakley County students from Westview and Martin Middle took top honors in several categories.

“I’m proud of these students’ desire to hone their writing skills and pleased they had the opportunity outside of their classroom to be recognized,” said MMS Principal Jon Gardner.

Last year, Ostenson attended the Young Writers Conference, which has previously attracted up to 300 participants. She went to several classes throughout the day focusing on various writing styles. The conference is offered to high school-ers and middle school-ers deemed advanced and mature enough to compete with the older students.

Ostenson said of her choice of entry, “I like poetry because it can explain the world or it can tell a story and describe it in a new way. You’re not telling someone what a tree looks like, you are painting a picture but with your words.”

Debbie Kerley served as the sponsoring teacher for Ostenson and praises her talent. “Essays, short answers for questions, she’s a writer,” Kerley underscored. “She knows how to put words together. She knows how to use words. She knows which words to use. She’s just a writer.”

The 17-year-old says her writing could be inherited since her father enjoys writing and her grandfather authored books.

An avid reader, Ostenson says she studies the different writing styles from different authors. She is considering a future as a poet or children’s books author. Since she also was among the winners for this year’s Harvest of the Month Calendar, she could easily illustrate her book as well.

“I’m thankful for a contest like this so that those like Lizzie have the opportunity to express themselves,” said Kerley.

The co-coordinators of the Young Writers Conference and Contest are Sally Brannen and David R. Carithers of the UTM Department of English & Modern Foreign Languages.

While this was the first time for the contest, Carithers says it will not be the last. They plan on enlisting entries prior to the 2021 event and announcing winners at the conference, which has been held annually since 2012. 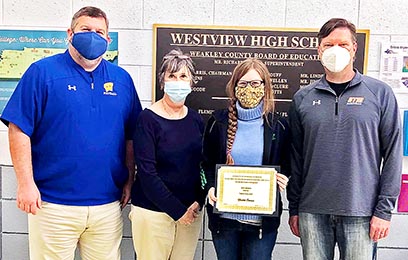 Westview Principal Jeromy Davidson, poetry winner Elisabeth Ostenson, teacher Debbie Kerley, and Dr. David Carithers celebrated Ostenson’s writing achievement. Carithers said of the annual conference and this year’s writing contest, “Creativity is the spark that ignites discovery and innovation, so the opportunity to engage in creative work can lead to intellectual growth of the individual, serve as an inspiration for those around them, and ultimately boost the quality of life of our community and region.”