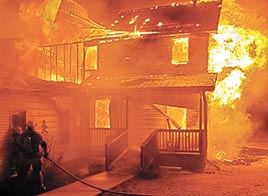 Firefighters extinguish the flames from a late-night residential blaze that claimed the life of an eight-year-old Amish boy on Blaylock Store Road December 23, 2020.

WEAKLEY COUNTY (December 23) — For the second time in two years, members of a local Amish family are mourning the tragic death of one of its children. An eight-year-old boy died from injuries sustained in a late-night house fire last week. In 2018, the family’s seven-year-old son, Eli, was struck by lightning and killed.

Authorities were notified of the residential blaze by a neighbor, who was awakened by an explosion.

Weakley County 911 dispatched McKenzie Fire and Rescue, as well as Gleason and Pillowville fire departments, to a large house that was reported to be fully involved. Weakley County EMS and the Weakley County Sheriff’s Department were also called to the scene.

According to McKenzie Fire and Rescue Battalion Chief Jason Arnold, the fire call was received at 11:04 p.m. on Wednesday, December 23, reporting a residential blaze at the home of David and Laura Yoder, located at 1280 Blaylock Store Rd., which is in the Weakley County portion of McKenzie.

When firefighters arrived at the scene, the house was fully engulfed in flames.

McKenzie’s fire engine was set up for fire suppression, and tankers from McKenzie, Gleason, and Pillowville fire departments established a tanker shuttle.

Arnold stated caring for the patient was their top priority. The firefighters provided medical assistance until EMS arrived a few minutes later. The EMS emergency medical technicians transported the boy from the scene to Baptist Hospital in Huntingdon, where he later died.

Once the patient was transported by EMS, the firefighters concentrated their efforts on fighting the fire.

Arnold stated a trackhoe was used to remove the sheet metal on the house, in order to gain access to the fire underneath and extinguish it.

It took at least two hours to get the fire under control.

The house is a total loss.

According to family members, the fire is thought to have started in the middle of the house. The cause of the structure fire is still under investigation. The house had no electricity running to it, but there were oil lamps, a kerosene refrigerator and a wood stove inside.

Members of the Amish community were cleaning up what’s left of the house on Thursday.

Send donations to benefit the Yoder family to the following address:

Make checks payable to Charles Wilkes, who is a close friend of the Yoder family.