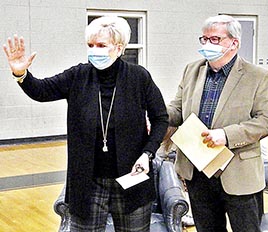 WEAKLEY COUNTY (December 30) – As 2020 comes to a close, many are looking back to reflect on the different accomplishments of the year. In the sports world, 2020 was a very difficult year, full of cancellations, postponements and uncertainty around every corner. However, the fighting spirit of athletes did not slow down this year, as many made great achievements in the world of athletics, including teams and individual players as well as offering contributions to local sports.

The Enterprise took a look back and highlighted the top stories making headlines in the world of sports throughout 2020.

Starting off at number 10 was the TSSAA adoption of COVID-19 Regulations for Fall Sports. On July 22 in Murfreesboro, the Tennessee Secondary School Athletic Association (TSSAA) met and approved an outline for the girls’ soccer and football seasons for the 2020-21 school year.

The football “Option 2 Hybrid” plan stated had the potential for a 10-game regular season, but also planned for an eight-game season with a reduced playoff field for Division I. This also planned to have football start as early as August 21 or as late as September 18.

The board also had in the plan that regular-season games would become a win for a school if the opposing team could not play due to COVID-19, but the team who had to forfeit would not receive a win or loss. If both teams announced they could not play due to a COVID-19-related reason, it was considered a “no-contest.”

In this meeting, the board also voted to allow cross-country, golf, volleyball, football, and girls’ soccer to be played, even if a school is learning remotely.

The girls’ soccer regular season would be eight weeks, with the championships set for November 11-14.

The board also regulated for schools to have temperature and symptom checks for all players and coaches before every practice and game. This regulation was also for school bands and cheer teams, but it discouraged the use of bands in general for all sporting events. Spectators were also required to have temperature checks, wear face coverings, and be socially distanced. The board also encouraged to have schools limit fan attendance.

Bernard Childress, the Executive Director of the TSSAA stated then, “The regulations and guidelines the Board passed today go into effect immediately for all sports. We’re hopeful that the probation on contact sports will be lifted before August 29, but if it’s not, the Board of Control has put some policies in place to help keep our kids and communities safe and lay out a roadmap to the start of our football and girls’ soccer seasons.”

On April 29, it was announced that a local college student would play for a major league football team, bringing the number 9 story on Jaylon Moore. Moore agreed to terms for an undrafted, free-agent with the Baltimore Ravens.

Moore, who is from Memphis, was a wide receiver for the UT Martin Skyhawks for four years. He also was the all-conference pick by the CFB Network and the Phi Steele in 2019. He accumulated 16 receptors for 292 yards and five touchdowns as a senior before an injury took him out of the season. While at UT Martin, he tallied 92 receptors for 1,492 yards and 18 touchdowns, which ranked him third in the program’s history.

The year began with the number 8 top story in the January 1 issue with the Westview Lady Chargers taking the crown for the 55th Annual Martin Lions Club Christmas Tournament Girls’ Championship. The Lady Charges had a 61-53 win over Dyer County. Avery Leyhue led the team in scoring 18 points with five three-point shots in the game. Jada Harrison also scored 15 points with a trio of three-pointers in the game. Jada Harrison was named the Most Valuable Player for the Lions Club Christmas Tournament with Tiara Yancey, Avery Leyhue, and Amerson Keyhue named to the All-Tournament Team.

Number 7’s top story saw Dresden native going all the way as Matt Beaty was a part of the World Series Championship game this year. The Los Angeles Dodgers won their seventh title with a win over the Tampa Bay Rays 3-1. Beaty began playing for the Dodgers last season. After the World Series win in the November 4 paper, Dresden High School vice-principal and former baseball coach Scott Killebrew spoke with the Enterprise about how Beaty’s professional career started.

Beaty used to practice Little League at Wilson Park and in the eighth grade shadowed Killebrew, where he noticed the talent that Beaty had to offer. In his freshmen year, Beaty joined the baseball team at Dresden High School where he would play third baseman, catcher, shortstop, and pitcher. He played at Dresden from 2007-2011. His junior year he had 19 home runs and was invited to a power-showcase at Chase Field, home of the Arizona Diamondbacks. The Seattle Mariners visited practices and St. Louis Cardinal scouts would come to games.

In 2011, Beaty was drafted to play at Kansas City, but opted to play college baseball at Belmont University. After college, he was picked in the 11th round of the MLB draft by the Dodgers. He played minors for the Utah Ogden Raptors, Great Lake Loons, then to the Rancho Cucamonga, and the Tulsa Drillers. He later joined the Los Angeles Dodgers and was part of the team’s 40-man roster in 2018, before making his debut on April 30, 2019 in San Francisco.

Beaty was not able to play during the World Series game, but former coach Scott Killebrew stated, “ … They’d pan the dugout and you could see the excitement on his face. He was doing his part.”

Number 6 comes from earlier this year when the Westview Lady Chargers got their eighth consecutive trip to the basketball state tournament. The Lady Chargers won their game against Covington to head to the state tournament. The Lady Chargers later won their quarterfinal game against Grainger. The Chargers the year before were three points shy of the title and had hopes of taking the Class AA win. However, due to COVID-19 the championships were cancelled before the game could be played.

Ranking number 5 is another success story from the girls’ basketball tournament with the Greenfield Lady Jackets going to the state tournament. The Jackets won against Memphis Academy of Health Sciences for Class A. The Lady Jackets then travelled to Murfreesboro for the quarterfinals against North Greene where Greenfield won 68-40. The suspension of the tournament by the TSSAA as a result of the onset of the COVID-19 pandemic left the Lady Jackets undefeated at 34-0 for the season and slated to earn the state championship title, but they returned home empty handed.

At number 4 was from the February 26 edition announcing Bettye Giles was a Tennessee Sports Hall of Fame inductee. Giles is the first and only director of women’s athletics at the University of Tennessee at Martin from 1969-1994. She is one of only 11 who were part of the Sports Hall of Fame Class of 2020. Giles was a primary advocate for women’s equality in Tennessee sports. She helped push the development of athletic opportunities for women. She served on many national committees promoting the growth of women’s sports. She also was the founder and first president of the Tennessee College Women’s Sports Federation. She received the Pathfinder Award from the National Association of Girls and Women in Sports. Giles also once convinced a female freshman to play basketball; this student was Pat Summit.

She was inducted in the UT Martin Hall of Fame in 1985 and the softball program at Martin named its program the “Bettye Giles Field.” In 2012, a statue of Giles, Summitt, and UT Martin alumnae Nadine Gearin, was placed outside the Kathleen and Tom Elam Center on the UT Martin campus.

The Tennessee Sports Hall of Fame was established in 1966 to honor athletes, teams, coaches, sportwriters, and sports administrators who have made an impact on the history of Tennessee sports.

Coming up at number 3 on the list is the signing of Westview High Schools kicker JT Carver to the UT Knoxville Vols that was published in the December 16 edition. Carver signed to play at The University of Tennessee on December 15.

During his career at Westview, Carver scored 191 points and was rated a five-star kicker by Kohl’s and Sailor, two national kicking services. Carver was ranked 14th nationally by Sailor and was a first-team all-state by the Tennessee Football Coaches Association and was a Mr. Football Finalist. He is enrolling at The University of Tennessee in January.

For the number 2 spot, the Greenfield Lady Jackets saw Tess Darby and Chloe Moore-McNeil named Miss Basketball finalists in the February 19 issue. The two players stood out in Class A and were chosen as finalists for the TSSAA Miss Basketball.

The finalists are chosen by high school basketball coaches and members of the media who nominate players from all over the state. The winners are picked based not only on athletic abilities, but on academics and character.

Finally, the top sports story for 2020 was the Dresden Middle School basketball dedication to Leigh Hart on December 13 and was published in the December 16 issue.

The reasoning behind this was the many years Leigh Hart had spent helping others as a coach, mentor, teacher and role model. Many former co-workers and players wanted to give back to Hart for all that she has done, not only for Dresden Middle School, but for Weakley County as a whole.

Hart began coaching in Dresden as a summer softball coach as a student at the University of Tennessee at Martin. She began teaching and coaching basketball in Dresden in 1982-1984 and then 1999-2019. During this tim,e she also had many other accomplishments, including serving as a torchbearer for the 2002 Olympic Games, beginning the Lion’s Den student reward store, a softball coach from 2006-2010, director of Dresden summer softball for 1980, 1982, 1983, and 1984. Hart was also coordinator for the Jump Rope for Heart from 1984-1989 to raise funds for the American Heart Association, a Beta Club sponsor from 2007-2019, book sponsor from 1982-2001 and coordinator of the Tennessee Iris Festival Road Race for nine years.

She led her team to five county championships. Many former players stated she was a teacher and coach they could always go to no matter what.

With the court dedication, the Dresden Middle School basketball court will be known as the Leigh Avery Hart Court.

Although this is only a list of the top 10 sports stories in Weakley County, it is not an exhaustive list as there were many big moments this year which could not be included.

The Enterprise will continue to highlight local Weakley County sports in the new year.