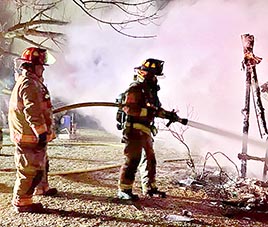 Sharon Fire Department personnel extinguished a garage fire in Sidonia over the weekend. Although the garage was a total loss, a nearby residence and a couple of vehicles were saved from the flames.

According to Sharon Fire Department Chief Gary Eddings, a 911 call was made to dispatch after 4 a.m. reporting a garage on fire at 1808 Adams Rd.

Deputy Fire Chief Justin Harris was the first on the scene and reported the garage, which was located behind the residence, was fully involved with flames.

Sharon firefighters responded to the fire call with two engines and 13 personnel and were able to prevent the flames from causing damage to the residence.

Greenfield Fire Department was called for mutual aid and responded to the scene with a water tanker and manpower.

The garage was a total loss. However, there was only minor damage to the two vehicles parked near the garage.

“We are appreciative of Greenfield Fire Department for assisting and grateful we were able to safely battle this blaze, even in temperatures well below freezing,” Chief Eddings said.

The fire was possibly ignited by a wood-burning stove inside the garage.