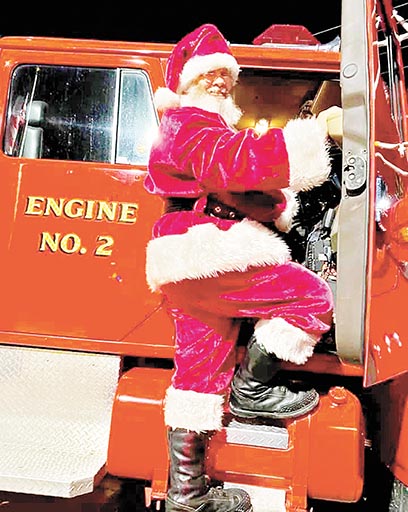 Santa rode a fire truck through Sharon on Christmas Eve, spreading joy and cheer to the children in the community. He stopped by the homes that requested him to do so and handed out treats to the youngsters.

SHARON (December 24) — It was another successful year for Santa’s annual Christmas Eve fire truck drive-through in the Sharon community, according to organizers and participants in the event.

“It went great,” Sharon Fire Chief Gary Eddings said. “It’s one of the highlights of the year for us. The families really appreciate it. It’s a tradition we started about nine years ago, and it’s gotten bigger every year.”

Chief Eddings says local citizens stood in their front yards to see Santa and his elves ride by.

He stated the firefighters (elves) on the lead fire truck played Christmas music, and operated the fire truck’s sirens and lights.

Santa, who rode on the second truck, stopped and handed out treats to the children at the residences of local citizens, who signed up in advance at Sharon City Hall.

“We handed out about 75 bags of cookies and 100 candy canes to the kids,” Chief Eddings said.

He noted approximately eight firefighters participating in the program served as elves.

Safety measures were observed to keep everyone healthy.