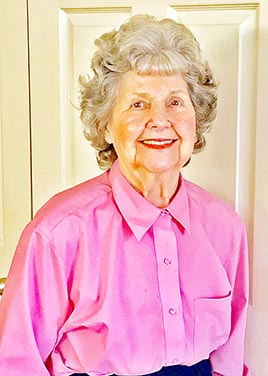 Many families suffered great hardship during the Great Depression. However, it was not all doom and gloom. Slightly more-affluent families managed to have the basic necessities, plus a few extras, such as modest Christmas presents for the children.

A Weakley County woman reflects on family life on the farm during the Great Depression.

According to 90-year-old Mary McClain Griffith, her family did fairly well during, what for many, was the hard times of the 1930s Depression Era.

Mrs. Griffith, who was born and raised in Weakley County, says her father, Thomas A. McClain, was a schoolteacher who taught at different schools in the area. Her mother was Elicebeth Roten McClain.

“I was raised in a big family,” Mrs. Griffith said.

“I had a wonderful childhood. I had a good papa and momma and good brothers and sisters,” Mrs. Griffith said. She and her family worked on the family farm. She and her sisters milked cows and sold the milk to Pet Milk Company.

The family raised a garden and row crop with mule-drawn implements, but when her brothers were older, they bought a tractor. They also raised hogs and cattle to provide meat for the family table and to sell at the market.

“By the time I came along, papa bought a car, a Chevrolet,” she said.  However, many of the poorer families still traveled by horse and buggy.

“I had four brothers and five sisters. One might get a doll, and another a doll buggy, or doll clothes. When she was older, she and her sisters got clothes for Christmas.

“I had a good mamma and papa. We all worked and we had plenty to eat.

She says her family had a good Christmas dinner, which included chicken and dressing, and a country ham from her family’s farm.

Mrs. Griffith stated there were so many people in her family, they would always spend Christmas Day at home, and a day or so later, go to her grandma’s house to celebrate Christmas.

She attended Dresden High School, and in her senior year, married Gene Owens from Mayfield, Kentucky. The couple relocated after being married, and she graduated from high school in Cuba, Tennessee. The couple had two children together before her first husband, Gene, died. She later married Jack Griffith.

When asked what she liked best about Christmas, she said, “To live in a land where we can worship the Lord.

“I was brought up a Christian. We had prayer at our house. We thanked God for our food at every meal; and, every night before we went to bed, we thanked the Lord we had a good place to live.

Mrs. Griffith says she is too old to stay by herself, so she resides at Weakley County Nursing Home. “I couldn’t be at a better place than where I am today. Everybody’s friendly to me. We have good food to eat and a nice, warm place to sleep.”