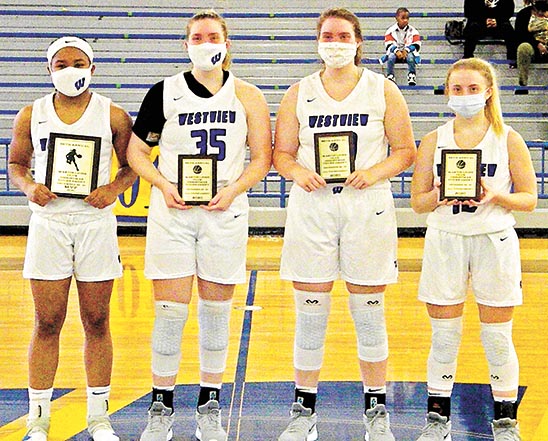 MARTIN (December 28) – The 56th Annual Lion’s Club Tournament did occur, despite many changes compared to previous years. This year, much of the fan attendance was limited and the boys’ teams played in the Martin Middle School gym instead of at Westview High School. These changes did not prevent the Westview Lady Chargers from coming in first place and winning the tournament’s championship title.

The Chargers then went to the final day of the tournament against Trenton-Peabody.

The Martin team kept a good lead throughout the game, never finishing a quarter without the lead. In the first quarter, Westview’s Abby Gordon and Kylee Alexander scored 10 points combined to help the Lady Chargers have a 17-10 lead. Gordon shot a trio of three pointers in the second quarter.

However, Trenton Peabody was very consistent with its two-point shots in the first half and was able to keep with Westview’s score. At halftime, the Chargers only had a five-point lead over Trenton at 30-25.

This small difference in the score would not last long after the Lady Chargers came back from halftime with a larger lead. Westview’s defense stepped up in the second half of the game and it showed as Trenton only scored four points in the third quarter compared to Westview’s 14.

Westview, in the fourth quarter, scored 17 points in total with eight of those by Charger Emerson Leyhue.

The Chargers won the game with a final score of 61-40 and took home the Girls’ Championship title for the 56th Annual Lion’s Club Tournament with Trenton coming in runner-up.

After the game, the All Tournament team was named with players Abby Gordon, Avery Leyhue, Emerson Leyhue from Westview. Jada Harrison of Westview earned Most Valuable Player. Adriana Skinner, KK Norman and Mia Easley from Trenton were included in the All Tournament Team.