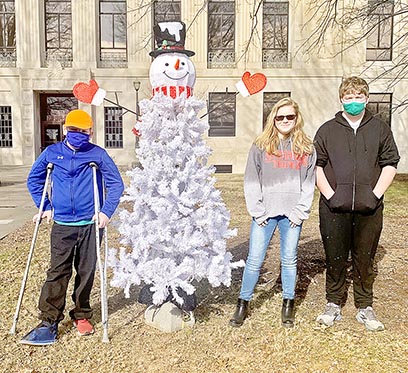 Three children from the community came out this week to create a snowman tree on the lawn of the courthouse in downtown Dresden. (L to R) Siblings Greylon, Gabrielle and Gavin Price built a snowman using a Christmas tree and decorations as part of the city’s first-ever “Do You Wanna Build a Snowman” event.

DRESDEN (December 28) – The City of Dresden is beginning a new holiday tradition this year that will offer fun for the whole family. The city is offering winter-themed events throughout January into February.

From now until January 15, families can visit the courthouse lawn in downtown Dresden and help decorate the square with snowmen. Families can bring their own materials from home and make a snowman for everyone to see. The snowmen can be made out of Christmas trees, tires, wreaths, buckets, logs, mascots, Legos, totes, trash bags, or anything else. The city is asking for citizens to get creative with making “snow” men. Families can take their snowmen home after February 28.

After January 15, the snowman displays will be up until February 28 and families can go on a snowman tour.

The city has also used funds to purchase a snowmaking machine. This machine will make snow and the city plans on having two days for snow on the Court Square and snow in Wilson Park.

These two days will feature snow on the square that children and families can come and play in. Wilson Park will also have a day for snow fun with snow tubing offered for children to slide down a snow-covered hill.

There is also a possibility of having hot drinks like hot cocoa and hot apple cider to sip on while out in the cold.  Because the snowmaking machine will need to be in freezing temperatures in order to work, no dates have been provided for the snow on the court square or snow in the Wilson Park. The city hopes to give a five-day notice for when these events will be held.

There is a possibility of a small fee for the snow day events, but that has not been decided yet.

“It will be a lot of fun for children and for families in the community,” Dresden Mayor Jeff Washburn stated.

Vendors can also set up to sell their wares during the events. For vendor information and for families who want to build a snowman on the square, contact communityengagement@cityofdresden.net.