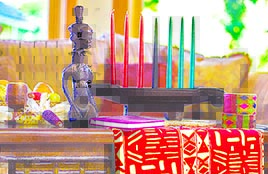 Kwanzaa is an annual celebration of African American culture, which began in 1966 by Dr. Maulana who based this holiday off of harvest festival traditions from many different parts of Africa.

The name Kwanzaa is from the Swahili phrase, “matunda ya kwanz,a” which means “first fruits.” The seven-day celebration highlights a different principle and value of African culture that are called Nguzo Saba in Swahili. These principles focus on building and reinforcing those in the African American community. The seven principles also have a day dedicated to them for Kwanzaa.

The first day is Umajo or unity, which is for unity in family, community, nation and race. The second day is Kujichagulia or self-determination for people to define themselves. Ujima is for collective work and responsibility to build the community together and solve problems together. Ujamaa is for cooperative economics, which is to create stores, shops and businesses that the community can profit from together. Nia is purposed to help build and develop community to restore African tradition. Kuumba is for creativity to help leave the community more beautiful. Imani is for faith to believe that the family and community teachings are important to preserve.

Families celebrate Kwanzaa in different ways, but many celebrations include songs, dances, African drums, storytelling, and a large traditional meal on December 31 called the Karamu. On each of the seven nights, the family will gather and light one of the candles on the candleholder called the Kinara and the principles of that day.

The colors of the candles are also significant. The red, black and green colors represent African gods. Red is the color for the struggle of self-determination and the freedom of African American people. Black represents people, Earth, hope, creativity and faith. Green represents the Earth that sustains life, provides hope, divination, employment, and the fruits of the harvest.

The candleholder is called the Kinara and represents ancestry. There is also a unity cup called the Kikombe Cha Umoja, which is used to perform a ritual on the sixth day of Kwanzaa. They pour into the unity cup for the dead whose souls are still on the Earth.

Kwanzaa is centered around African culture, but many people of all racial ethnic backgrounds are welcome to join in the celebration.