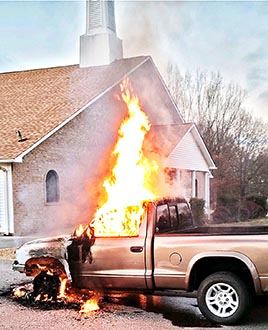 Sharon Firefighters extinguished a vehicle fire in the Sidonia Community on Monday. There were no injuries. Additionally, a nearby church was not damaged as a result of the fire.

SIDONIA (December 14) — The Sharon Fire Department responded to two vehicle fires in the Sidonia area during the past week.

According to Sharon Fire Chief Gary Eddings, around 4:30 p.m. on Monday, December 14, Sharon firefighters were dispatched to the Assembly of God Church parking lot, located at 633 Gaylord Rd., where a parked vehicle was ablaze.

The 911-caller stated the vehicle was on fire and there might be someone sitting inside. The Sharon Fire Department responded with eight personnel and a fire engine. However, shortly after the firefighter’s arrival, Deputy Chief Justin Harris confirmed no one was inside the vehicle.

Firefighters then pulled a fire hose to the vehicle and extinguished the flames by applying a foaming agent.

The vehicle’s owner, Franklin “Frank” Hayes, stated he came to the church to do some work. When he got back into his 2001 Dodge Dakota pickup to leave, something popped as he attempted to start the engine, and Hayes immediately saw fire coming out of the engine compartment.

Sharon firefighters continued applying the foaming agent until the fire scene was safe, before obtaining the owner’s vehicle information and returning to the Sharon Fire Station.