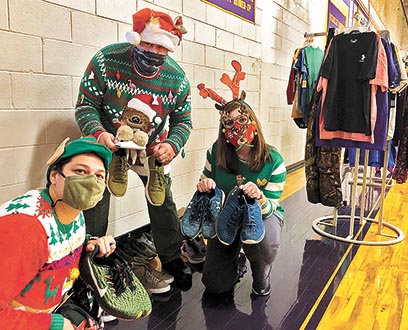 Christy Fulcher, a Weakley CARES volunteer this year and an elf at the Sharon School Christmas Store, donated 50 pairs of athletic footwear to meet a need. The middle school had first choice and the remaining shoes were part of the store. Seen here is Fulcher with husband and School Resource Officer Steve Fulcher and Principal Michelle Clements.

SHARON (December 17) – Scrooge could have skipped those ghostly visits and had his cold heart melted in minutes had he only stopped by Sharon School this Christmas season.

The now second-annual Christmas store was open for business on Thursday. Throughout the semester, students earned SOAR bucks for good behavior, good grades, reaching goals and acts of kindness. (SOAR is the school’s emphasis on being Safe, On task, Always Achieving, and Respectful.)

Principal Michelle Clements said with items leftover from last year’s store and new purchases, plus donations from the community, the children were selecting from approximately $1500 of items.

Tristan Phelps, a third grader, had 80 bucks to spend on items displayed on rows of tables stretching from one end of the gymnasium to the other. His personal shopper, teacher Kayla Dyer who donned a Christmas light tiara for the occasion, was holding an armful of space-oriented goodies. She explained that all the nine-year-old had chosen thus far was for his sister, mom and dad.

At checkout, with 10 bucks still remaining, he had only a bag of Starbursts candies to call his own. But his smile denoted that he was definitely a satisfied customer.

Clements said to adhere to COVID-19 precautions, students in masks were entering the gym in small groups six feet apart; using sanitizer, and relying on their assigned personal shopper to gather the presents they selected. Wrapping was done by parents, Central Office workers and Weakley CARES Volunteers who have already been in the school this year.

The new program Weakley CARES was how Christy Fulcher found herself in elf attire for the day. She was also one of the donors who had contributed to the offerings, having given 50 pairs of athletic shoes to the school a bit earlier. After every middle-schooler had their choice of footwear, the remaining shoes were on sale at the store.

Clements said the generous donation was prompted when a student came in with no sole on the bottom of his shoe.

“There was a need,” Fulcher said, when asked why she had collected the new and gently-used footwear. “I had an abundance of shoes and I felt bad having those at home and the kids not having them. So I decided to bring all mine for the kids. I’m super excited that they got a little bit of happiness from them.”

The store not only provides a way for children to enjoy the rewards of positive actions, it also meets some basic needs.

They knew that little guy shopping for a shirt needed one. He’d been wearing the same clothing all the time.

Jessica Glasgow, RTI District Coordinator for the county, served as one of the Christmas present wrappers.

“I helped last year and had to return to see the excitement on the kids’ faces as they told us whose names to write on the tags for each gift,” she said. “It starts my Christmas break off in a joyful way because it reminds me of the giving that Christmas is supposed to be about.”