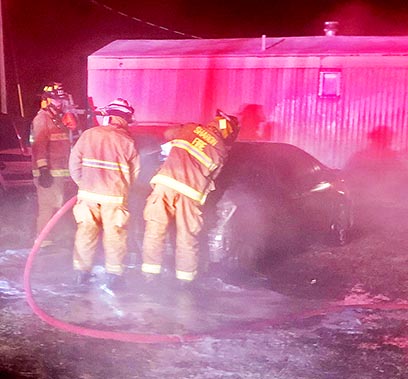 Sharon firefighters prevented a Sidonia Road residence from being consumed by the flames, after a vehicle parked nearby caught fire and threatened the home. Photos courtesy of Chief Gary Eddings and the Sharon Fire Department.

SHARON (December 8) — Firefighters from the Sharon Fire Department saved a rural Weakley County home, after a vehicle parked near the residence caught fire.

According to Sharon Fire Chief Gary Eddings, the fire was reported at 1151 Sidonia Road, at approximately 3:53 a.m. on Tuesday, December 8.

The residents quickly evacuated the dwelling and no one was injured in the blaze.

When Sharon firefighters arrived on the scene, the vehicle was fully engulfed in flames and was parked next to another vehicle, which was beginning to receive damage from the fire.

Sharon Fire Department personnel extinguished the vehicle fire and saved the second vehicle with minimal damage. The residence was not damaged in the incident.

Sharon firefighters were on the scene for approximately one hour extinguishing the vehicle and had to apply a foaming agent after the gas tank had exploded.

Weakley County Sheriff’s deputies also responded to the scene and provided traffic control during the emergency.

The fire was extinguished at approximately 4:52 a.m. and firefighters smoke-tested for the rest of the day.