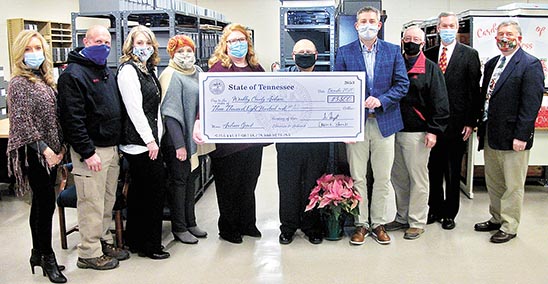 DRESDEN (December 16) — On Wednesday, December 16, Tennessee Secretary of State Tre Hargett was at the Weakley County Archives, located at 8250 Hwy. 22 in Dresden, for a grant presentation.

Secretary Hargett stated he delivered the check, but Rep. Darby, who represents Weakley, and part of Obion and Carroll counties, helped procure the grant for the Archives.

Hargett described the preservation of Weakley County’s records as “a labor of love” that many people don’t appreciate until they need them.

According to Archives Director Amy Pullen, the grant money will be utilized to implement a disaster preparedness plan, which involves purchasing supplies in preparation for a disaster, such as a fire, tornado or anything that might happen to the building and damage county records. It includes purchasing plastic sheeting to help protect the records in case of a water leak, and boxes to transport the records to a safe location.

The Tennessee State Library and Archives administers the grant through the secretary of state’s office.

“When we applied for the grant, County Mayor Jake Bynum helped us with that, and Commissioner David Hawks is a big advocate for the Archives,” Pullen said. She stated Register of Deeds April Wright Jones helped by writing a letter of support for the Archives. According to Pullen, the Archives received a $2,000 grant last year.

For many years, all of Weakley County’s public records were located inside the Weakley County Courthouse, but the need to relocate some of the records was necessitated by the lack of storage space. Local government officials established the Weakley County Archives inside a room at the former Dresden Elementary School. Before moving the records from the courthouse basement to the school building, volunteers treated the books to remove any mold that may have been on the documents. These records must be kept indefinitely, in accordance with state law.

After approximately four years, the Archives was moved from Dresden’s old Elementary School to a room inside the Weakley County Center Personal Development Center on Highway 22 in Dresden. The space was available and Weakley County Director of Schools Randy Frazier used part of a grant the School Department received to renovate the Adult Learning Center to remodel the room for use by the Weakley County Archives.

Operations at the Archives are funded by a $2 fee collected by the county for each title registration. This means no local tax money is required to operate the Archives.

Commissioner Owen noted some of the old records were lost when the courthouse burned in 1948.

However, according to Register of Deeds Jones, as the old courthouse was burning, all of the deed books were passed out the window and saved. Jones notes the oldest surviving deeds maintained by her office go back to 1825, and include such famous Tennesseans as frontiersman Davy Crockett and U.S. President Andrew Jackson.

The Archives is open 10 a.m. until 12 noon on Tuesday and Wednesday. Pullen is the only paid employee on staff. All other workers are volunteers. For more information, call 731-364-2163. Special appointments may be made in advance according to availability.

Some of the volunteers who care for the archives are also members of the Weakley County Historical and Genealogical Society, another highly involved group with a passion for genealogy, research and history – including a wealth of knowledge on cemeteries, courthouses and local Tennessee Historical Markers. For questions about the Weakley County Historical and Genealogical Society, meeting locations, to become a member, or to be placed on the Forget Me Not Newsletter list, email: wchgs1@yahoo.com.​ Visit the website at:  ​https://www.ceweldonlibrary.org/wchgs

Hargett’s stated his second stop was to present a CARES Act check, amounting to $7,385, to Discovery Park of America in Union City on behalf of U.S. Congressman David Kustoff, U.S. Senator Marsha Blackburn and U.S. Senator Lamar Alexander. The funds will be used to purchase video conferencing equipment and cleaning supplies, in response to the COVID-19 pandemic.