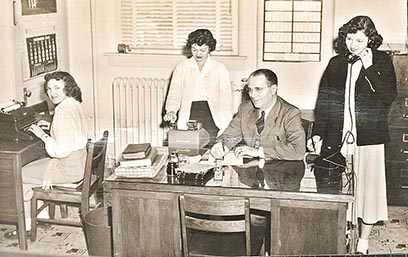 Dresden High School Principal W.L. Darnell is pictured with several students in the front office (circa 1949).

Local, National and World Affairs as Described in 1952 and 1969 Letters

In this week’s third and final article concerning the messages discovered inside sealed bottles, hidden in the walls of an old historic home located on Linden Street in Dresden, we reveal additional contents of the letters, which provide a snapshot of the times.

Current property owner Tony Winstead discovered these makeshift time capsules when he was tearing out the interior walls of the additions built onto the original 1850s-era structure.

Herschel Jennings Priestley (H.J.), who owned and resided in the home with his wife, La Nelle Priestley, from 1935 to 1985, wrote the letters. The messages describe local happenings, including the construction of churches, schools, government buildings and other structures. It also mentions local office holders, and discusses politics at the various levels of government, including the political races of the day.

“This year, the Church of Christ at Dresden is erecting a new house of worship on the Gleason Highway (Hwy. 22) at the edge of town. Elders are: Talmage Peery, Gordon Fowler and S.A. Butts. The old church house was sold to Fred King for a storehouse. Mrs. Casey Pentecost and her daughter, Marie Mangrum, bought the parsonage. Another (parsonage) is to be built on the church ground later on.

“After a close contest, Gen. Dwight Eisenhower was nominated last week over Robert A. Taft for Republican candidate for president. Others mentioned were: Harold Stassen, Gen. Douglas MacArthur, and Gov. Earl Warren of California.

“Soon, the Democratic Party will choose a candidate to succeed Harry S. Truman. Prominent prospects are: Estes Keefauver, Senator from Tennessee; Gov. Adelai Stevenson of Illinois; Averell Harriman of New York; and Senator Richard Russell Jr. of Georgia. Vice-President Alben Barkley of Kentucky is another favorite son, but has age against him.

“Dresden’s Mayor is Waymon Gaylord. Jere Cooper is Congressman from this district. Congressman Albert Gore of Carthage is running for U.S. Senator against K.D. McKellar, who is in his eighties and has been Senator for about 40 years. County officers are serving their first term in the new courthouse.

“The Highway No. 22 is being widened, curbed and guttered from the Court Square to the edge of town toward Gleason.

“The new Grammar School building has been occupied one winter.

“Candidates for Governor of Tennessee are incumbent – Gordon Browning, Clifford Robertson Allen of Nashville, Clifford Pierce of Memphis, and Frank Clement of Dickson.

“A new atom plant is being constructed near Paducah, Kentucky; and a hydrogen bomb is said to have been made and due for testing soon.

“War in Korea goes on and truce talks get nowhere.

“A long steel strike is on. Vandals dynamited power poles near substations and threw Weakley County into darkness for half a night and power was restored only after some 12 hours. A strike has been carried on by Weakley County Municipal Power and Light Company workers for seven months.

“A new road via Latham to Kentucky line is under construction.

“World enemy #1 at present seems to be Joseph Stalin, the aged dictator of Russia. Hitler and Mussolini are some seven years dead.

“Why do people build houses and other structures and fail to date them? Some information stored away in each attic or wall of each house would be of interest to future generations who might tear down the structures. Big buildings have cornerstones containing mementoes of the day. Why not put a can or bottle in frame houses or brick or stone ones, and give a short record of the times – a tombstone, as it were, to identify the remains at future dates?”

“Richard Nixon is president and the long war in Viet Nam is a galling and unpopular one with little progress toward settlement.

“Buford Ellington is governor of Tennessee.

“Inflation is running apace and gimmicks to slow it seem to no avail. Many want to be supported by the government though. The waste of the military and efforts to land a man on the moon next month with multi-billions cost sends the debt up.

“The Kennedy clan has one last son now, a senator, after four of the family have died violently and his far-flung organization with unlimited funds is running him hard for president of the U.S. in 1973. The magazines, newspapers, radio and television shove the Kennedy name and face at one every day many times a day. The greedy politicians are already jumping on his coattails for the good of their own skins. However, it may all be to no avail. ‘Circuses and grain’ helped destroy Rome, and when this is read, America may well have been destroyed the same way. In addition to their military waste and giveaways, we have the wasteful moon shot programs costing untold billions. ‘Pride goeth before destruction.’ We want to beat Russia to the moon, and then what?”

These letters, written over half a century ago, are like whispers from the past, giving the reader a glimpse into the daily events and concerns of local citizens that lived during those times. 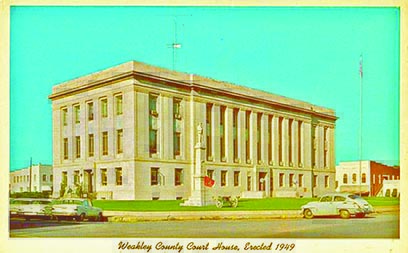 The old Weakley County Courthouse burned in 1948 and the present courthouse was built and dedicated by 1950. This is the ‘new courthouse’ referred to in Herschel Jennings Priestley’s letter found in a sealed bottle inside the walls of a residence in 2020.