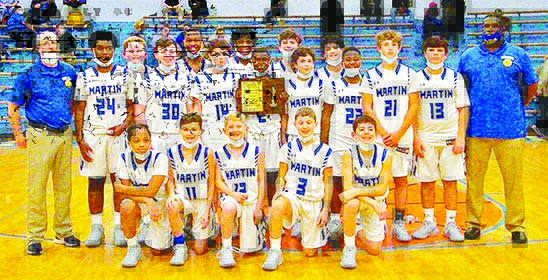 MARTIN (December 10) – The boys’ championship game for the Weakley County Middle School Basketball Tournament had Martin Middle School hosting Gleason Jr. High. The Chargers were looking for the boys to win the championship after its girls won over Greenfield last Monday night. Martin was able to take the win over Gleason by 20 points.

Gleason again was the first team to make a score in the second quarter with Lehmkuhl who made a two-point shot. Lehmkuhl scored the most points for Gleason in the second quarter with three, while teammate Kade Sawyers made two. The Bulldogs attempted numerous free throws and shots in the game, but the Chargers’ defense was very difficult for the team to work around. Martin however, was still finding the net for 14 more points before the halftime.

Going into the second half of the game, Gleason needed to work to improve their score if they had any chance of beating Martin or going into overtime. The Bulldogs faced a very tough Martin defense and was not able to get past them for the majority of the third quarter. Only Lehmkuhl was able to score for the Bulldogs with five points, making a tree-point shot. Martin’s offense was working much more efficiently to break past Gleason to score, picking up 10 points with Donteze Joy making eight points alone. This resulted in Martin leading 36-13 at the start of the fourth quarter.

Gleason was able to score 13 points in the fourth quarter, with eight being two-point shots. Martin was still making it past Gleason for the score. The Chargers added 13 points to their already 36 and took the game with a 20-point lead with a final score of 49-29.

Leading Martin in points was Donteze Joy with 16. and Miani Woolridge was close behind with 11. For Gleason, Drake Lehmkuhl was points leader for the Bulldogs with 10 and Owen Taylor scored nine.

With this win, the Martin Middle School Chargers were able to become the boy’s team county.

Martin’s head coach, Andy Slinger noted that this was an important win for the team because it was very uncertain if they would be able to play or not. This game helped the kids have a sense of normalcy and he was very proud with how they played.