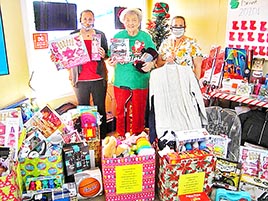 Cassie Turver, Lou Ann Powers, and Janna Bizzle gather around the numerous donations that were donated by the members of the community and local school.

Cash Express collected donations from all around Weakley County with 32 boxes being left in businesses throughout Dresden, Greenfield and Sharon. From these box donations, hundreds of dollars’ worth of toys, food, and clothes were donated. All donations that were raised through this drive were donated to Santa’s Helpers, a non-profit organization in Dresden.

More than $700 was raised in cash donations, which was spent on buying specific items that children had expressed an interest in having for Christmas. Santa’s Helpers compiles lists of things that children would like for Christmas and volunteers do their best every year to make those wishes come true.

Dresden Elementary School was also involved as its canned food drive went to Cash Express. The school helped to donate 1,713 cans. Sherry Hatchel’s second-grade class raised the most cans, with 223 cans. Her class will have a pizza party for this accomplishment.

Lou Ann Powers with Santa’s Helpers was overjoyed to see the large donation to help children have a great Christmas.