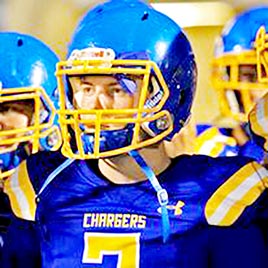 He will be part of the NCAA early-signing period, which begins today.

He scored 191 points in his four-year career with the Chargers and was rated a five-star kicking by two national kicking services (Kohl’s and Sailor). Sailor has Carver ranked 14th nationally. He also was first-team all-state by the Tennessee Football Coaches Association and a finalist for the Mr. Football kicking honor, as awarded by the Tennessee Titans. He also was a two-time all-region first-team selection and has a 27 ACT score with a 3.49 GPA. He’s a dual-enrollment student with UT-Martin.

Carver has drawn praise from several kicking coaches. Former Tennessee kicker James Wilhoit, who kicked the 50-yard field goal in 2004 to defeat Florida and who runs Wilhoit Kicking said, “I feel he’s one of the top field goal kickers in the country. That’s the great thing about him going to Tennessee, he’s going to be very coachable and do anything the coaches ask him to do.”

“He (Carver) again has proven to be a very dependable field goal kicker. His field goal range is impressive. Carver’s kickoffs are solid, but he is a plug-and-play field goal kicker in college,” said Kohl. “We trust Carver on field goals about as much as anyone in the 2021 class. He is a natural ball striker who can help a college program immediately.”

“JT does an outstanding job on field goals. He is smooth, accurate and has 55-plus yard range off the ground. His kickoffs are strong, near the top of his class. A natural with a bright college future,” said Chris Sailor of Sailor Kicking. “JT does very well under pressure. He’s one of the hardest workers out there. He’s a nice addition for Tennessee.”

Wilhoit spoke of his kickoff acumen.

“His kickoffs are strong. He’s in the top of his class on kickoffs, but he’s one of the best five or six field goal kickers in the country. That’s where, to continue to be a complete kicker, is going to help him,” said the former Vols’ kicker. “When it comes to field goals, he’s going to walk in day one and have a chance to compete and help. He’s got a lot of upside, but he’s extremely consistent as well. Tennessee is getting a good one.”

Carver will be a preferred walk-on and plans to enroll at Tennessee in January. He is the son of Keith and Hollianne Carver of Martin.