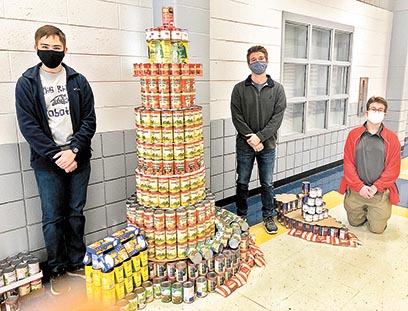 Nicholas Sterrett, Grant McGehee, and Hunter Terrell of the Westview STEM Club stand with their “canstruction,” a “working” (thanks to LED) lighthouse shining the light on hunger. The project was prompted by WCMT and UTM’s Can Caravan. Students brought in almost 1,000 cans which will be delivered to WeCARE Ministries.

Confronted with a short time between Thanksgiving break and the WCMT-UTM Can Caravan pick-up date, the students in the high school STEM club decided to forego their planned can structure competition and work together to bring “light” to the subject of hunger.

Four members – Hunter Terrell, Grant McGehee, Nicholas Sterrett, and Chase Winschel – had taken part in previous year’s “Canstruction” event at Discovery Park of America which was cancelled this year due to COVID-19 concerns. They were familiar with the emphasis on unpacking a themed message and the rules of what is and isn’t allowed in building. They chose a lighthouse to underscore the need to shed “light” on hunger.

Rules include: the cans have to be self-supporting, leveling boards are acceptable, and to complete the structure, a design has to be chosen and sketched out so that an estimate can be made on the number of cans needed to complete the intended look.

STEM adviser Laura Sterrett points out that student learning in such a project comes from leaning into 3D visualization.

“You have to use the cans for color and to show dimension. Using the size and the shape of the cans in a 3D order is actually pretty challenging,” she explained.

Trying out the design, redesigning, and taking the necessary steps to successfully transport the finished work from the room in which it was initially built and rebuilding it exactly in the school lobby where it is currently on display are also aspects of the learning experience.

Sterrett says the lighthouse, considered a simple design, was chosen with the time constraints in mind and the fact that various students would be working on the project at different times.

Harrison Simpson, Michael Moon, and Kizer Riley served as some of the primary builders of the structure. Sterrett estimates that around ten students ultimately participated in building the lighthouse, the home for the lighthouse keeper (complete with boxed mac and cheese roof), and the ship in the harbor with waves (rice bags) splashing against the cliff.

To add a touch more fun, LED lights were installed and can be controlled remotely to draw the attention of passers-by.

In all, Sterrett estimates that 950 cans were used in the construction. Students delivered the canned goods to WE CARE Ministries.