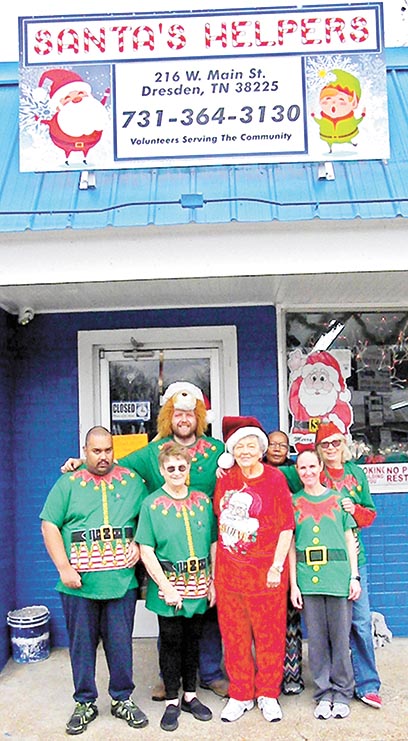 Throughout the year, local volunteers through Santa’s Helpers in Dresden help community members with needs in various aspects of their life. Recently, with the help of Dresden’s Chace Kesterson and Delta Imaging in Dresden, the building sports a new sign for visitors and passerbys. Volunteers include (L to R, Front) Kurtis Floyd, Vickie Phillips, Lou Ann Powers, Ashton Pratt, (Back) Chace Kesterson, Barbara Sneed, and Mary Alfred. Not pictured are Barbra Crites, Melinda Pritchett, and Tammie Vasquez.

DRESDEN (December 4) – Santa’s Helpers is a non-profit origination located in Dresden that provides much-needed food, clothing, and other essential items to those around Weakley County. Many different volunteers work all year long to help others in their community and one volunteer wanted to give back to Santa’s Helpers with a new sign for the organization’s downtown Dresden building.

Chace Kesterson of Dresden is one of the many volunteers at Santa’s Helpers and wanted to give back to Lou Ann Powers and Santa’s Helpers for all that is done through this organization. He said he wanted to have a new sign because of all the hard work and good will that comes from Santa’s Helpers.

On November 3, Chase Kesterson held a fundraiser at the Weakley County Courthouse where $359 was raised to help purchase the new sign. Kesterson noted that West Kentucky and Tennessee Telecommunications (WK&T) CEO Trevor Bonnstetter donated $100 because he knew how important an organization like Santa’s Helpers is in the community. Dresden Mayor Jeff Washburn also donated $50. Those two donations, along with many others from community members, helped to raise the money needed for the new sign. Without the help of all those in the community, the new sign could have never been bought.

Kesterson said this about the importance of Santa’s Helpers and its volunteers for the community, “Ms. Powers doesn’t waste a breath helping those in need of help. From the moment a box of food leaves the front door, she’s already packing the next one. When a child comes in the door, she is eager to give them clothes, toys, books, and candy. You will see her not only at Santa’s Helpers everyday working, but at night shopping at various stores as well. Even when she is tired from a long days’ work, she never refuses anyone a box of food. I do believe she has enough Heavenly treasures stored up for the entire town and everyone in it. The same goes for the volunteers that help Ms. Powers each day. These men and women volunteers sweat in the heat, shiver in the cold, exhale from exhaustion some days, some wear knee braces, some wear wrist braces, some work regular jobs, some have already retired, and yet they volunteer each week.”

The new sign has already been installed and was made by Delta Imaging of Dresden.