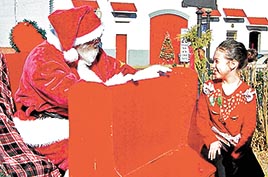 Santa visited with children Saturday in downtown Sharon as they gave him their wish list during the city’s Hometown Christmas event. Photo by Jasmine Williams/The Enterprise

SHARON (December 5) – The City of Sharon celebrated a hometown Christmas Saturday for children and families to take part in and spread some holiday cheer.

The Sharon Volunteer Fire Department had bells, Santa Letter forms, and stockings filled with treats for children. They could then go to Downtown Sharon to meet Santa Claus. All who visited Santa also received a free gift and had pictures taken. Children could also drop off their letters to Santa in a mailbox where they will receive a reply from Santa himself.

The city had originally scheduled to play the movie The Polar Express, however due to social-distancing guidelines, the movie was not shown.