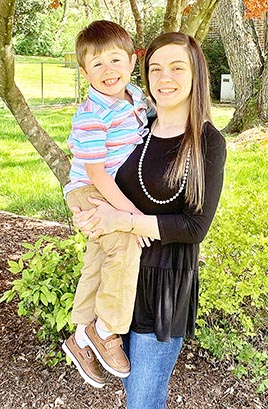 Kathalina Hodges and her son Barrett

MARTIN (December 4) – Kathalina Hodges, 24, is a Martin resident who has experienced two kidney transplants in her short life and a long journey with her health to be where she is today.

Kathalina is from the town of Rives and went to high school at Obion County Central High School in Troy. Before starting high school, Kathalina suffered a neck injury from falling from a porch after a seizure. After her neck surgery she needed to wear a neck brace for 14 months, which turned out to be her entire freshman year of high school and part of her sophomore year. After getting the neck brace off, she suffered another injury that resulted her wearing a cast and boot for 14 weeks. By the time she had entered her junior year of high school, she had no other health problems. That was until she began to have very frequent UTIs (urinary tract infections). She was not sexually active and there was no other reason for her to have UTIs so frequently that medications would not subdue them.

After being sent to a specialist to confirm that her bladder and uterus was functioning correctly, her kidney was found to be the problem. Kathalina was referred to a kidney specialist who found that her kidney was not functioning, and she needed surgery immediately. This surgery was to put a hemodialysis port in her chest to help filter out blood to remove things that could be harmful.

Kathalina had eaten before going to this appointment, which meant that during surgery, she needed to stay awake for the procedure. She did not feel anything except pressure, and she noted that it was very awful to experience.

After the surgery she was able to walk out of the hospital but had to go to a dialysis clinic for her first treatment. The treatment took four hours to complete because she got so sick during it. Her mother, sister and then-boyfriend, soon-to-be husband, Chris, was by her side.

After almost two months with the hemodialysis port in her chest, she went to Vanderbilt Medical Center for her kidneys where she was told that she could use peritoneal dialysis (PD). She had another surgery to have the new PD port placed in her stomach and for the hemodialysis port to be removed. She and her family had to go through six weeks of training in order to know how to handle the PD port. After the training she was given medical equipment, boxes of dialysis fluid, masks, gloves and other necessary equipment.

She used PD dialysis for a year before being put on the Pediatric Kidney Transplant waiting list at Vanderbilt. After two weeks, her mother received the call that Kathalina had a kidney. Kathalina noted that she received the news at school and ran through the halls to tell her friends.

That day they left to drive to Vanderbilt for her surgery and on April 13, 2013, her first kidney transplant was completed. Kathalina notes that she only had some pain and aches after her surgery, but it went very well. For the next month, the family lived close to Vanderbilt to go to the numerous doctor appointments. After two months she was able to go home and have follow-ups with her kidney doctor.

Kathalina was able to complete her senior year of high school in 2014. That same year she also married her boyfriend, Chris.

In 2015, Kathalina’s mother was battling stage 4 lung cancer and the couple planned to have a baby before her mother would not be able to see her grandchild. Kathalina took all medical advice and even had medication changed and in August of 2015, she was pregnant. After she got pregnant, Kathalina had doctor appointments and labs done every two weeks. Throughout her pregnancy, her kidney continued to work well. On March 26, 2016, Kathalina went into labor and had a C-Section and brought her son Barrett, who was healthy and happy, into the world.

However, six months after the birth of their son, Kathalina began to show signs that her body was rejecting the kidney. She had many doctor appointments to try and prevent a full kidney failure, but in July of 2018 she went into surgery to have her second dialysis port placement surgery. Her kidney failed and was functioning at 30 percent. Kathalina had to begin PD again and continued to see Dr. Hopla in Martin. After many doctor visits and hospital stays, in November of 2019, she was stable enough to be put on the Adult Kidney Transplant List.
Kathalina notes that during the time she was put on the list and waiting for a call was a very rough time for her and her family. She was sick with a young child and her husband was deployed overseas for the military. During this time, calls with her husband kept her spirits up. Kathalina was a “back-up” for the person ahead of her on the transplant list, meaning if the first in line were unable to receive the kidney for any reason, she would get it.

But on September 20 of this year, she received a call that she was the back-up for two different kidneys and on September 21 she got the call to come to Vanderbilt that same day for further testing. After many tests, she was told that she was scheduled for surgery the next day.

That night, one of her labs were very irregular and Kathalina was nervous she would not be able to have the transplant done. But all of her numbers came back to normal and she was close to having her surgery. Kathalina stated, “It was becoming more and more real to me the closer and closer I got to the OR.”

She then went into a three-her surgery and needed 30 staples, but she had a new working kidney. Her surgery was on a Tuesday and she was discharged Friday night. She again had many follow-up doctor appointments and after a month, she had staples removed and her PD port out on October 20.

Kathalina reports that as of December 3, 72 days after the surgery, she still has to have two-week follow-ups, but her kidney is functioning well and doctors are continuing to make sure that she is still healthy.

Currently, Kathalina Hodges is raising her son Barrett full-time. Her husband Chris is an Air Traffic Controller in Afghanistan where he was in the United States Air Force. The family hopes to be reunited next year.

Kathalina is taking online classes and helps her son with his schooling when he sees “Ms. Julie” and his friends. Each night the family will have a FaceTime with Chris before Barrett goes to sleep.